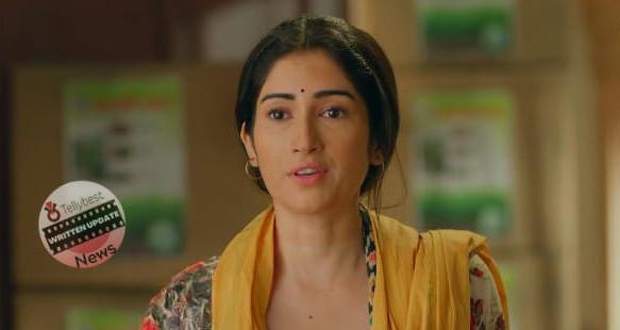 Today's Rajjo 19th September 2022 episode starts with Arjun telling Manorama about Rajjo missing her every moment of her life and comparing Manorama to his mother.

Hearing Arjun’s words, Madhu gets shocked and glares at Arjun.

Meanwhile, Arjun takes Manorama to Rajjo but Pushkar stops him and asks him to wait till Rajjo gets healthy.

Manorama gets worried hearing about Rajjo’s condition but Pushkar advises her to listen to him in his blackmailing voice.

Just then, Arjun assures Manorama that he will take care of Rajjo and requests her to leave her scarf to Rajjo.

Emotional Manorama goes with Pushkar and eyes Rajjo’s room for the last time.

Outside the Thakur house, Pushkar threatens to kill Rajjo and advises her to save her remaining dignity.

In the storeroom, Rajjo gains consciousness and calls for her Maai.

In the living room, Madhu blames Pushkar for leaving Rajjo in her room and Urvashi doubts Arjun’s intentions of marrying her.

Hearing Urvashi's words, Madhu assures Urvashi that no one can take her place in Arjun’s heart.

In the storeroom, Rajjo tries to stand up and stumbles due to pain but Arjun holds her in his arms.

Arjun apologises to Rajjo for putting her life in the hostel and she tells him she trusts him more than the sun.

Afterwards, Arjun gives her Manorama’s scarf and regrets not telling Rajjo about Manorama.

However, Rajjo finds Manorama's bangle piece in the scarf and she furiously asks Arjun about her Maai.

Seeing Rajjo’s crying face, Arjun tells her the truth and Rajjo dashes towards the entrance while Arjun runs behind her.

At the same time, Pushkar’s car starts and he glares at Manorama from the car’s mirror.

Rajjo runs behind the car screaming for her mother and climbs onto the car behind.

Seeing Rajjo, Manorama screams at the driver to stop the car and hugs her daughter when the car stops.

Pushkar glares at the duo of mother and daughter and Arjun gets happy after finally seeing Rajjo and her mother together.

At the same time, Arjun gets emotional seeing the reunion and Manorama holds her hand in front of Arjun in gratitude.

Manorama bows her head to Arjun like she's praying to a god.

At the same time, Pushkar thinks his past has come back to haunt her.

© Copyright tellybest.com, 2020, 2021. All Rights Reserved. Unauthorized use and/or duplication of any material from tellybest.com without written permission is strictly prohibited.
Cached Saved on: Friday 30th of September 2022 11:45:01 PMCached Disp on: Saturday 1st of October 2022 05:01:12 PM