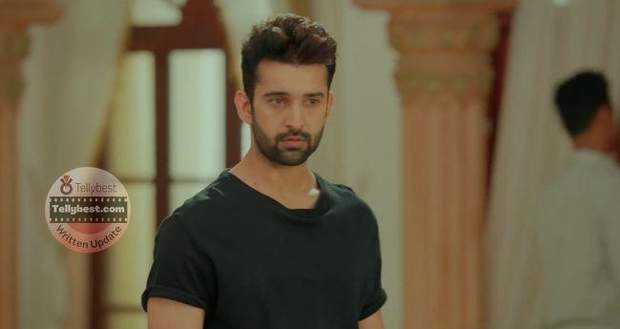 Meanwhile, Pushkar smiles seeing his plan work and decides to take Manorma to her room to get the truth out of it.

Meanwhile, Urvashi lies to Arjun about his father’s debit card getting stuck in the machine and extracts Arjun’s card to pay her debtors.

Rajjo overhears Urvashi's nefarious plans and decides to foil them.

As Urvashi is coming out of the room looking happy when Rajjo hops on her and extracts the card from Urvashi.

Arjun comes out on hearing the noise while Urvashi looks for the debit card that has fallen.

In the meantime, Rajjo glues the card in her hands and ruins it by breaking it into two pieces.

Later, Arjun tells her to not worry and send her bills to him and he will send cash to them.

After a while, Arjun tells Urvashi to go and get ready while Urvashi looks pained at her plan to get money out fails.

Later, Pushkar enjoys Manorma falling unconscious in her room and asks the nurse to not let her out of the room.

In the meantime, Urvashi is making Rajjo click her pictures when she gets a reminder call from money lenders.

Meanwhile, Manorma is calling Pushkar names while walking in an inebriated state when she spots Pushkar talking on the phone and throws slippers on him and hides behind the pillar.

Pushkar gets angry and asks in a loud voice who has thrown a slipper on him.

However, no one hears her from behind the pillar and goes away.

She decides to teach Pushkar a lesson before telling Rajjo everything.

Meanwhile, Rajjo is walking in the hallway when she smells Arjun’s perfume and turns around.

Seeing Arjun come her way she begins to click his photos on her mobile.

Arjun asks her what is she doing while she tells him that she is clicking his photos and asks him to pose.

Arjun is also in a good mood and begins to pose for Rajjo.

Later he comes close to her and takes a selfie with her.

Rajjo is enjoying seeing herself with Arjun when his voice brings her out of her reverie.

Arjun looks at the same angry young man and asks Rajjo what has she been doing.

Rajjo uses Urvashi’s name and tells him that she is clicking his photos.

Arjun mocks her phone camera while Rajjo tells him that he is so good-looking that any camera will do.

After bantering with Arjun, Rajjo walks away from him but becomes sad seeing Tilak's preparations and recalls that soon Arjun will not be hers anymore but will become Urvashi’s.

She recalls her moments in the past when Arjun proudly declared her his wife.

Later, Urvashi’s parents express their gratitude to Madhumalti for looking after the preparations.

In the meantime, Urvashi is panicking in her room blaming Rajjo for her trouble.

Meanwhile, the moneylender arrives at the party with a bouquet of flowers.

Later, Sia comes to Chirag and asks him to stop Arjun from marrying Urvashi as she likes Rajjo better.

However, Chirag tells her to pray to God who listens to children immediately.

Later, Rajjo comes to look for Manorma but she is roaming the halls going towards the party hall.