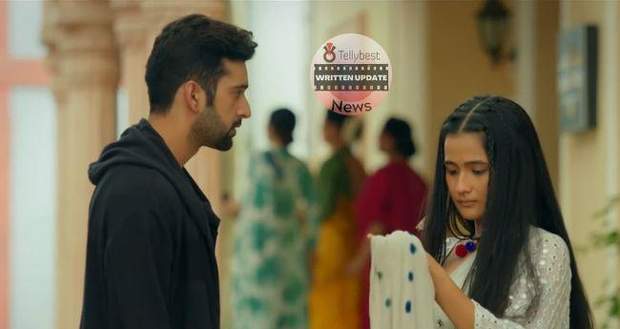 Madhu complains about Kalindi waking up late and asks her about Arjun while Kalindi states that she saw Arjun running after a garbage truck.

The family goes outside to look for him while Jhilmil thinks that her daughter-in-law Swara will soon become Madhu's favorite.

Rajjo asks him what he is doing and he shows her his family members and tells her that he brought her there to hide.

As Madhu, Kalindi and Jhilmil wonder where Arjun might be going in such an early morning, Rajjo breaks one of the flower decorations so that the flower petals fall on both her and Arjun.

Arjun gets lost in the moment and but he gets out of the trance as Rajjo says that she will go out to look for her mother from there only.

Arjun asks her if she will be able to find Manorama easily while Rajjo thinks that she cannot be a burden on him anymore.

Realizing that her luggage is in Arjun's room, Rajjo tells him to take care of it until she finds her mother and returns for it.

Later, Arjun goes back inside the house while Rajjo runs around the market asking the people for the rescue center.

However, due to her wrong pronunciation, she isn't able to get any help and Arjun comes there telling her that he will help her find her mother.

They both sit in the car and Arjun tells her to put on the seatbelt.

Rajjo starts scolding him saying that she's not wearing any pants and when she learns that he was talking about the seatbelt, she tells him that it is called 'Patta' not a seatbelt.

Later, at the disaster management house, Rajjo jumps inside the crowd to reach the counter but gets pushed out there.

Afterward, Arjun helps her reach the counter but the operator tells everyone that he's on a lunch break and won't work till his break is over.

On the other hand, Manorama has also reached the disaster management building.

Arjun shouts at the operator and tells him to do his work which shocks everyone at the counter and inside the counter.

© Copyright tellybest.com, 2020, 2021. All Rights Reserved. Unauthorized use and/or duplication of any material from tellybest.com without written permission is strictly prohibited.
Cached Saved on: Friday 30th of September 2022 07:05:56 PMCached Disp on: Saturday 1st of October 2022 04:30:50 PM