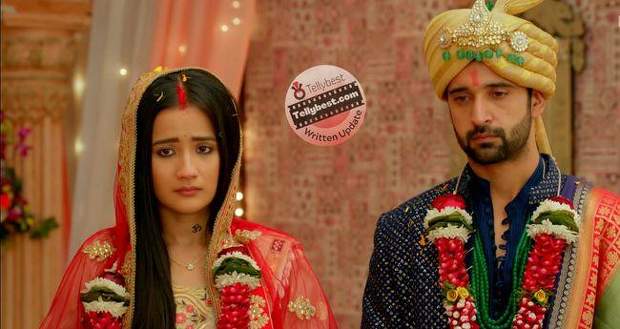 Today's Rajjo 20th December 2022 episode starts with Manorama urging Rajjo to forgive her past and move on since she is clearly in love with Arjun.

Meanwhile, Naman congratulates Arjun and offers him to drink alcohol.

However, Arjun denies drinking it and Chirag steps forward, telling Naman not to force alcohol on anyone as one drinks it as a matter of liking or when one is in pain & desperate.

Naman then questions if alcohol is still an elixir for Chirag but Chirag says that he is finally quit drinking and all credit goes to Rajjo.

Taking Arjun aside while the men of the house party by doing cheer, Chirag states that Rajjo is an angel without wings and a magic wand.

Meanwhile, Rajjo lays her head on Manorama's lap and asks what to do since she is unaware of how Arjun feels about him.

Manorama urges Rajjo to find it out while Chirag instigates Arjun at the same time and laughingly says that he has become Tadap Babu (Desperate) from Khad Babu.

Rajjo also stands up from her mother's lap and smilingly goes to meet Arjun and reveal her feelings for him.

As Arjun climbs the stairs, a drunk Naman stops him and addresses Rajjo as the servant of this house.

Arjun scolds him and says she has a name and she didn't stay here by herself, Madhumalti requested her to do so.

Arjun gets a flashback where Rajjo said she would leave only after she proves herself & Manorama innocent.

Naman then advises Arjun to be extra careful since marriage becomes toxic at times and Arjun agrees with him but speaks on Rajjo's behalf as he held her back.

Rajjo who is standing upstairs hears Arjun say that married life can become like a suffocating jail and she thinks he is speaking about himself.

However, it is a misunderstanding as Arjun only sympathizes with Rajjo due to the trouble he caused her.

On the other hand, Chirag narrates a tale of a prince and a princess (Arjun & Rajjo) to Bittu by using a projector.

Meanwhile, Arjun comes up and sees Rajjo and both of them get awkward.

Rajjo thinks that Khad Babu doesn't want to be with her and says she is tired so she wants to go to sleep.

Arjun volunteers to sleep on the ground but Rajjo says he doesn't need to.

Downstairs, Madhumalti prays in the Puja room, saying she did what she had to do to save Arjun from Akal Mrityu Dosha.

For this, Rajjo needed to be his from mind & body and she never cared about her anyways.

Meanwhile, Arjun gathers the pillows from the bed as Rajjo's eyes follow him.

She pouts and requests Arjun by saying please two times to sleep on the bed and Arjun finally gives in.

© Copyright tellybest.com, 2022, 2023. All Rights Reserved. Unauthorized use and/or duplication of any material from tellybest.com without written permission is strictly prohibited.
Cached Saved on: Wednesday 25th of January 2023 06:05:47 PMCached Disp on: Thursday 9th of February 2023 04:32:29 AM