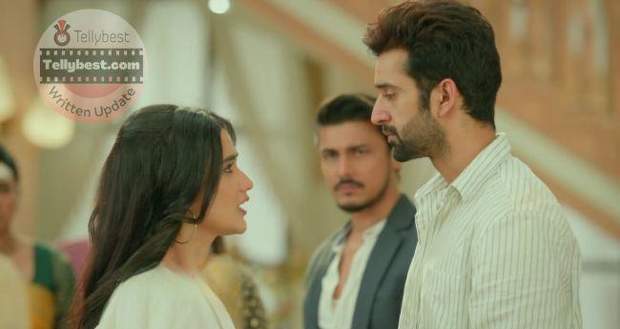 Today's Rajjo 20th January 2023 episode starts with Arjun asking Pushkar to tell him the reason why is he disqualifying Rajjo.

Pushkar says that it is a renounced academy and no one will get special treatment even if it is Arjun's wife.

Pushkar says that he knows that Rajjo did not come yesterday as there was something wrong in her blood which she wanted to hide and Arjun helped her to do so.

Manorma enters and holds Pushkar by his collar and says how dare he point fingers at her daughter.

Pushkar releases himself and says that they should be thankful that they are not insulting and kicking both the mother and daughter out.

Madhumalti enters with Jhilmil and asks Pushkar to behave himself as he is talking to her inlaws.

Pushkar says that he does not mix personal and professional lives and is being more than fair as Rajjo did not come to the academy yesterday.

Manorma asks Pushkar why did an uncalled nurse come to their house and give Rajjo an injection when she did not tell anyone about Rajjo’s health.

Everyone starts blaming Manorma for pointing fingers at Pushkar however, Rajjo barges in and takes a stand for Manorma saying that Manorma should meet Pushkar’s eyes and stand for herself.

Manorma calls the nurse who came in to give Rajjo the injection and confesses that she gave Rajjo the steroid injection on Pushkar’s order.

Chirag asks Pushkar why is he after Rajjo and her race and why he keeps trying to sabotage her.

Pushkar instantly agrees to the accusation put forward by Madhumalti and says that he does not want any competition lying in Niharika’s way.

Niharika erupts and says that why Pushkar has done is unacceptable as she wants to win the race with the help of her own caliber and also that she considers Rajjo as her friend.

Arjun says that if Pushkar has even a shred of self-respect left then he should just resign from the academy or he will tell the federation people himself by writing them a letter.

Niharika goes to Rajjo and apologizes to her on behalf of Pushkar but Rajjo stops her and says that she has done nothing wrong.

Rajjo then goes to Arjun and thanks him for saving her but then after a pause she corrects her statement and says that she is thankful that he saved her after rejecting her, breaking her heart, and leaving her.

Rajjo says until and unless he tells her the truth she won't let him go anywhere and holds his hand.

Rajjo says to Arjun to tell her why is he like this at which Arjun starts dancing and says he is what he is as it is fashion.

Rajjo looks at him in disgust while Arjun keeps dancing.

After a while, Madhumalti finds Arjun who tells her that he has returned only for Rajjo’s sake but will soon leave for the USA.

Arjun asks Madhumalti to prepare Carrot pudding for him as it might be the last time she will be able to feed him.

Rajjo overhears this conversation and says to herself while yelling about what Arjun thinks of her that he keeps on hurting her and then saving her.

Arjun calls his friend to book another ticket to America at which she snatches the phone away from his hand and says that Arjun does not want the ticket as he is not going anywhere.

Rajjo holds Arjun by his collar and asks him why he wants to go to America by leaving everyone alone.

She says that he is punishing her for what sin at which Arjun pulls himself back and say that he can't answer any of her questions.