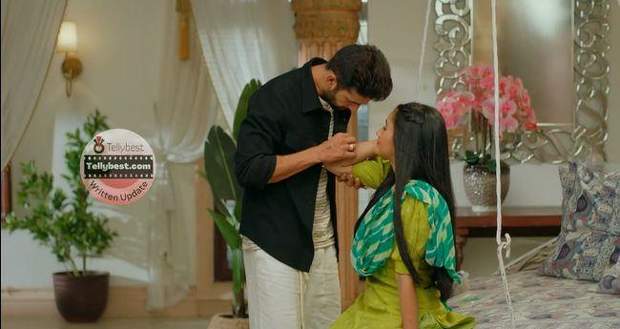 Today's Rajjo 20th November 2022 episode starts with Arjun blaming Rajjo for Urvashi’s kidnapping after Vicky takes her name in front of everyone as the mastermind behind the plan.

Rajjo denies all the accusations and tells Arjun that she does not know why Vicky took her name after getting caught.

Urvashi interrupts the conversation and says that she remembers everything as to why Rajjo kidnapped her.

Urvashi says that Rajjo was trying to steal 30 lacs from Arjun’s bank when he was unconscious at the hospital.

Rajjo gets shocked to hear Urvashi and tells Arjun that it was Urvashi who wanted to steal his money by making him sign some papers.

Urvashi asks Rajjo to stop lying and tells Arjun that she tried to stop Rajjo from taking away those papers as she saw what Rajjo was up to.

Rajjo asks Urvashi to stop lying and asks Arjun to trust in her as she was trying to save his money from Urvashi.

As Urvashi and Rajjo begin to fight, Arjun shuts them up and says neither of them is right.

Arjun asks both Urvashi and Rajjo to bring evidence to him if they want to prove themselves innocent.

Urvashi gives Arjun footage outside his hospital room which shows Rajjo running away with the papers with Urvashi going after her.

Rajjo says that it is not what it seems like and she was running after taking away the papers from Urvashi.

Rajjo tells Arjun that she handed the papers to Kalindi to which Kalindi admits keeping them without checking what they are.

After Kalindi hands over the paper to Arjun, Arjun gets mad in anger at seeing Rajjo’s name on them instead of Urvashi’s.

Rajjo gets stunned to see her name on the papers and asks Arjun to trust her once.

Arjun does not listen to another word from Rajjo and screams in anger while tearing the papers and throwing them away.

Urvashi recalls how she planned her own kidnapping with the help of Vicky and smirks at Rajjo thinking she has won against Rajjo.

Arjun downgrades Rajjo’s characters with remarks like a shameless, gold digger, etc. while Rajjo tells him that Kalindi knows the truth about Urvashi.

Rajjo asks Kalindi to tell everyone the truth while Kalindi stands silent in front of her.

© Copyright tellybest.com, 2022, 2023. All Rights Reserved. Unauthorized use and/or duplication of any material from tellybest.com without written permission is strictly prohibited.
Cached Saved on: Monday 21st of November 2022 12:44:52 AMCached Disp on: Thursday 1st of December 2022 01:12:26 PM