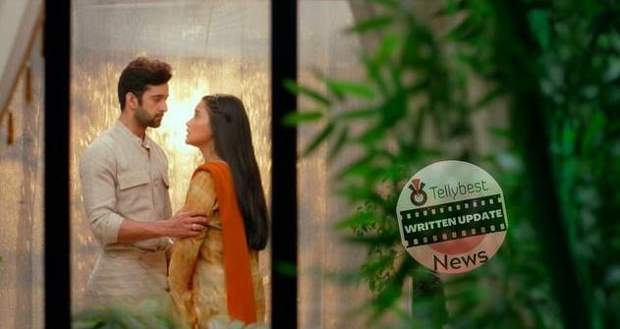 Today's Rajjo 20th October 2022 episode starts with Pushkar questioning Rajjo about her mother and how she ended up at the hospital to find out if she has any evidence.

Puskar gets happy and says that it is hard to find it find based on such small evidence.

However, Rajjo says that she will find the culprit at any cost, and Manorama will also wake up.

Further, Rajjo is putting the clothes in Arjun's room while he is working.

Suddenly, Arjun turns and Rajjo falls on his lap while Urvashi comes there and gets angry at them.

Further, Urvashi demands them to separate and Rajjo smiles as she puts her hands around Arjun to make Urvashi even more jealous.

Arjun pushes her away from his lap and tells her to leave the room but Rajjo goes to the sofa and lays on the bed while acting like she is feeling sleepy.

On the other hand, Swara advises Kalindi to do something and stand by Madhu so that she can get her rights.

Feeling angered, Urvashi slaps her and tells her that this is to remind her that she'll always be above her.

Further, Urvashi looks at Rajjo with vengeance and leaves while Rajjo wonders out loud why people don't see her truth.

Just then, Kalindi comes there and manipulates Rajjo into thinking that she's a good person and that they should team up to expose Urvashi.

Elsewhere, Urvashi is talking to Pushkar and asking him why she should join hands with him while he tells her that he doesn't want someone like Rajjo to have the same rights as her daughter Kalindi.

They join hands and form a plan while Kalindi keeps advising Rajjo on how they can instigate Urvashi and expose her truth to everyone.

On the other side of the house, Jhilmil tells Mukund to do something that will make them stand out in Madhu's eyes.

At night, Urvashi is on her way toward Arjun's room when she suddenly trips on something and shouts in annoyance.

Arjun rushes outside and gets shocked to see Rajjo and Urvashi lying on the ground.

Arjun asks what is happening while Urvashi says that she was coming to check on him when she tripped on Rajjo.

They ask Rajjo why she's sleeping there and Rajjo tells Arjun that she was becoming 'Laxman Rekha' for him and will not let anything evil enter the room.

Arjun angrily goes back inside his room while Urvashi goes back to her room after glaring at Rajjo.

© Copyright tellybest.com, 2022, 2023. All Rights Reserved. Unauthorized use and/or duplication of any material from tellybest.com without written permission is strictly prohibited.
Cached Saved on: Monday 21st of November 2022 01:33:17 AMCached Disp on: Friday 9th of December 2022 04:02:42 AM