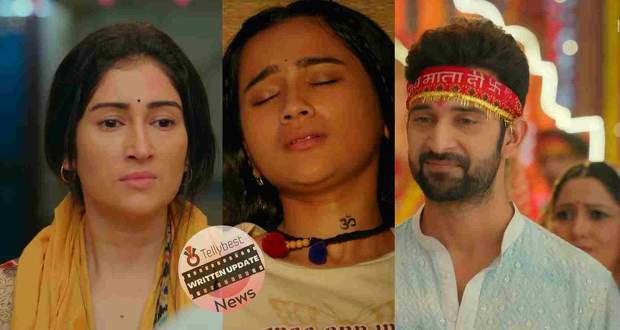 Today's Rajjo 20th September 2022 episode starts with Pushkar persuading Arjun to send Rajjo and Manorama back to their village.

Hearing Pushkar’s words, Manorama gets afraid that Pushkar will kill them.

However, Arjun declares that he will not let Rajjo go anywhere.

Just then, Manorama sees the large blotch of blood on Rajjo’s shirt and gets worried about her.

In Madhu’s room, Madhu and Jhilmil are talking about Arjun.

Madhu tells her worries about Arjun's stubborn behaviour and destroying Thakur’s reputation by letting Rajjo live in his room.

On the other hand, Rajjo feels dizzy due to blood loss and Arjun gets worried.

Arjun scolds Rajjo for being stubborn and getting her brain checked as well.

However, Pushkar assures Arjun that he will get Rajjo treated in a clinic but stubborn Arjun declares Rajjo will go back tomorrow.

In the storeroom, Rajjo is drinking water from Manorama’s hand and Madhu gets furious seeing Rajjo in her house again.

Seeing Madhu angry, Manorama apologizes to Arjun for making his life difficult and assures him that they will go right now.

However, Arjun requests Manorama and Rajjo to spend a night in his house and rest.

In the kitchen, Arjun stops Madhu from crushing the red chilli and requests her to sleep.

In Urvashi’s room, Urvashi's mother scolds Urvashi for not speaking up about Arjun’s actions and enduring him living with another girl.

Urvashi expresses her worry about Arjun’s weird behaviour toward Rajjo and worries about their relationship future.

In the storeroom, Manorama and Rajjo are cuddling on the mat and talking about their separation.

Afterwards, Manorama orders Rajjo to never run as they got separated due to her race in Neeltaal.

However, Rajjo holds out Manorama’s medal and informs her she will not ask her anything.

Rajjo tells Manorama that running is good as her mother has also done athletics.

Hearing Rajjo’s words, Manorama gets shocked and tries to take her back to Neeltaal immediately.

However, Rajjo informs Manorama that she has other plans for their future.

In the kitchen, Urvashi confronts Arjun for caring for Rajjo more than her and not listening to her requests.

Meanwhile, Arjun apologises to Urvashi but she doesn’t listen to him.

Furious Arjun takes a glass of juice for Rajjo's Maai while Urvashi prays to god to kick out Rajjo from Arjun’s life.

In the storeroom, Rajjo declares she will participate in athletics and bring money for them.

Hearing Rajjo’s words, Manorama scolds Rajjo and orders her to go back with her but Rajjo refuses.