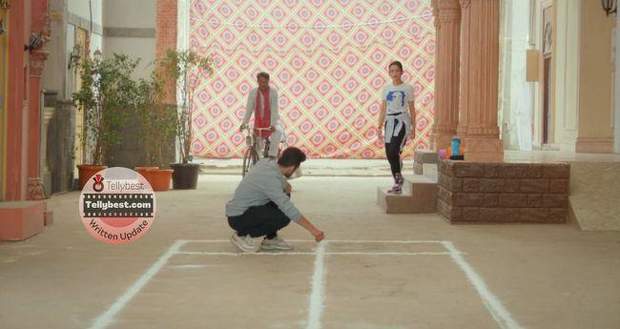 Today's Rajjo 21st December 2022 episode starts with Rajjo making a face and telling Arjun that this is the last time he can make her agree to say yes to his requests.

However, Arjun stays quiet and softly tells Rajjo that it's not frequent that his requests are completed and he says please to Rajjo.

He sleeps on the ground while Rajjo lays on the bed, bending her knees.

Meanwhile, Madhu is making plans for how Arjun's Akal Mrityu Dosha will now shift to Rajjo after they consummate but Chirag comes.

Madhu fears that he heard everything but Chirag didn't & instead, hugs Madhumalti, saying she has a big heart to accept Rajjo.

On the other hand, Pushkar takes his anger out on Bunty, saying he cannot do whatever he wants now as Rajjo is her top priority enemy and has become the Thakur household's Bahu officially.

In Arjun's room, Arjun quietly takes Rajjo's name and says she hasn't slept while Rajjo says the same thing that he hasn't slept.

Arjun calls himself foolish and tells Rajjo that he is very obliged to her but Rajjo asks him not to think like this.

He suddenly asks Rajjo what she wants to do as he wants to help her become the best athlete.

Rajjo gets emotional and asks Arjun if he is still willing and Arjun nods and reminds her to just focus on her goal and take care of Manorama.

He then remembers how Rajjo asked for these two things and Rajjo asks him if he also has dreams like going to America again since he was very successful there in the past.

Arjun doesn't answer her, making Rajjo feel bad as she thinks she is the reason everything has changed for him.

Rajjo then tells Khad Babu that she's never going to be a barrier to his dreams as they both sleep.

The next day, Madhumalti brings tea intentionally to Arjun's room to see the condition of their bed.

However, after seeing the extra bed case on the ground, Madhu gets angry, thinking Rajjo slept on it.

She asks Arjun if anything happened last night but Arjun says she shouldn't ask any bedroom questions and also not push Rajjo to do something.

Madhu also scolds Arjun for wearing training clothes as he informs her that he is getting Rajjo out for practice.

Arjun starts to make white lines on the ground for practice when Rajjo walks out wearing joggers.

Arjun stares at her as she gets conscious that she has worn the jacket around her waist wrong.

Rajjo says she saw Urvashi too but stops saying the full sentence.

She also tells Arjun that she has learned how to say Lucknow and complains about how itchy these clothes are.

Arjun taunts her and says if she doesn't wear these or the shoes, she will be saying "oui ma" when running.

Later, Arjun guides Rajjo for the warm-up session and sees how wonky she gets.

Standing beside her, Arjun holds her head as she circles it and Saibo track plays in the background.

On the other hand, Malti's sister taunts her that Rajjo finally convinced her to give in while they both see Rajjo and Arjun coming close face-to-face while Rajjo does her push-ups and Arjun holds her legs in one place.

© Copyright tellybest.com, 2022, 2023. All Rights Reserved. Unauthorized use and/or duplication of any material from tellybest.com without written permission is strictly prohibited.
Cached Saved on: Wednesday 25th of January 2023 09:31:39 AMCached Disp on: Wednesday 1st of February 2023 06:03:25 PM