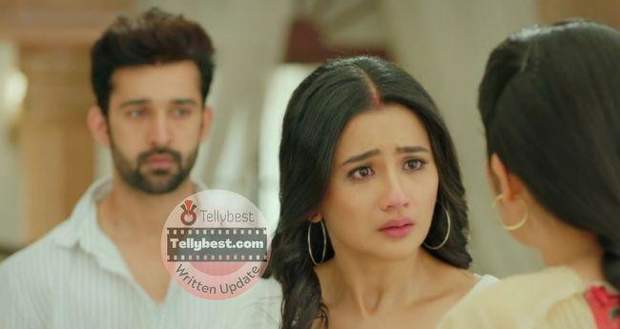 Today's Rajjo 21st January 2023 episode starts with Arjun asking Rajjo why she cares about where is he going after all the two most important things in her life are her mother and her race.

Rajjo asks Arjun why he changes his stance when he is unconscious and changes it back when he gets conscious.

Chirag enters and says that a person is always truthful when he is unconscious however, Arjun asks him not to interfere in his business and then leaves the room.

Manorma enters and tells Rajjo that Arjun loves her more than anyone but is bounded by something.

Chirag says that this is connected to Madhumalti somehow as he has noticed a few things over the past.

Chirag asks Rajjo when Arjun started behaving differently to which Rajjo replies that he got a phone call a while back and has been acting strangely since then.

Rajjo also tells Chirag that the phone call was for Madhumalti but Arjun picked it up.

Meanwhile, Pushkar is agitated because of Rajjo and Manorma while Madhumalti scolds him for giving the steroid injection to Rajjo and then blames Pushkar for all the mishappenings that have happened to Rajjo.

Pushkar agrees to everything and says that he is only helping Madhumalti because she also wanted Rajjo to quit her race.

Madhumalti yells at Pushkar and says that if only he co-operated with her a little then both of them would have gotten what they wanted as Rajjo would be dead and Arjun’s life would be saved.

She says that Pushkar chose to kill Rajjo by another means because he did not care about Madhumalti at all.

Madhumalti says that if he will put his hands on Rajjo again then she will expose him in front of everyone to which Pushkar yells back and says if he will go down then he will take her with him.

Meanwhile, Chirag brings the call records of that phone and asks Rajjo the time and date when the phone call happened.

Rajjo does as she is told and Chirag calls the number at that date and time but no one answers the call.

Chirag tries again and finds out the phone number belongs to Guru Ma and instantly remembers the day when he found Jhilmil hiding Guru ma outside the house.

Meanwhile, Madhumalti gathers a lot of gold jewelry for Guru ma because one of Guru ma’s men has asked her to do so.

Elsewhere, Rajjo and Chirag disguise themselves so that they can go to Guru ma without getting exposed.

Rajjo looks at the picture of Guruma and says if only murder was allowed she would have strangled Guruma with her own bare hands.

Rajjo says that she is not at all scared as she is doing nothing wrong, unlike the Guruma who takes advantage of other people’s fear.

Chirag says that Rajjo is more mature than anyone else in the house after which a woman who works for Guruma calls Rajjo and Chirag in.

A lot of well-built bodyguards stand in front of Rajjo and Chirag which makes them feel like small ants.

The bodyguards check them and confiscate their mobile phones after which Rajjo and Chirag go inside and find Guruma sitting on an elevated chair.

Rajjo has fitted a small video camera on her skirt.

© Copyright tellybest.com, 2022, 2023. All Rights Reserved. Unauthorized use and/or duplication of any material from tellybest.com without written permission is strictly prohibited.
Cached Saved on: Wednesday 25th of January 2023 09:25:42 AMCached Disp on: Monday 6th of February 2023 05:25:02 AM