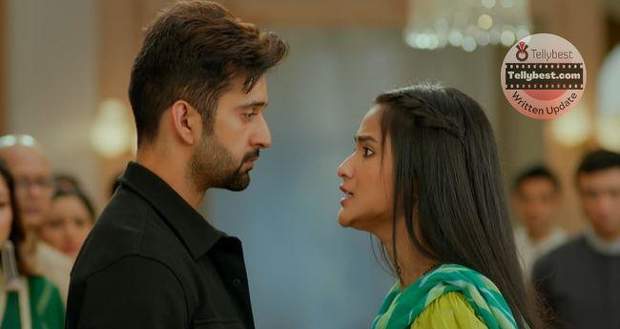 Meanwhile, Kalindi remembers Urvashi’s threat about exposing her affair to the family and how she has forced her to get Rajjo’s signature on the papers.

Coming out of reverie, Kalindi denies knowing anything about it and tells her that she has only helped her in keeping the papers and that too on her earnest request.

Hearing Kalindi’s refusal hurts Rajjo a lot and she asks Arjun to take her to the police station where all the truth will come out.

However, Madhmalti refuses to involve the police in their family matter and further ruining their reputation.

Arjun expresses disgust at Rajjo’s manipulations and lying while telling Chirag how she has repaid their favours.

Later, he even insults Rajjo’s mother asking for her involvement in the kidnapping.

Rajjo gets furious to hear Arjun’s insult against her mother and warns him to not involve her in all this.

Arjun tells her that she has believed in her tales of her mother being in a coma but thanks to Urvashi now he knows the truth.

He also tells her that when he went to see Manorma she was buying jewellery and was not in a coma.

Rajjo does not believe Arjun and tells him that the only way to know this is to go to the hospital with her.

Meanwhile, Kalindi prays to God to expose Urvashi and send her out of their house and lives before she could expose her secret.

Elsewhere, Urvashi is worried about being exposed as Pushkar is nowhere to be found and she has no way of replaying the same scenario to fool Arjun.

She is afraid that Arjun will find Manorama in a coma and that all her plans will go down the hill.

On the way, Arjun taunts Rajjo by calling Vicky while Rajjo exclaims regret at Arjun’s changed behaviour who implicitly believes in a liar and cheat like Urvashi.

Meanwhile, Kalindi gets shocked to see Chirag and rudely tells him that there is no need to question her actions while Chirag looks at her suspiciously.

Meanwhile, Arjun snatches Rajjo’s phone to keep her from informing Nangu Kaka of their arrival and orchestrating a new drama for his benefit.

After a while, Arjun insists that Rajjo's mother is at the house near a temple.

She tells him it is Pratichaya where they are using new techniques to train her mother to breathe without the oxygen mask.

Arjun mocks her saying coma patients cannot be taken away from the oxygen support.

Rajjo does not believe him and tells him that he is no doctor to know everything and that the new doctor is far better.

Later, Nangu kaka calls Rajjo and worriedly tells her that on his return from work he could not find his mother at the hospital and the doctor tells her that she must have been transferred.

Rajjo is shocked to hear her being transferred without her consent and asks Arjun to take her to Pratichaya.

On reaching there, Arjun is amazed to see that the house is being converted into an NGO and praises Rajjo and her villager's length of deception.

Later, Arjun angrily shows Rajjo her mother plucking flowers while Rajjo feels delighted to see her mother well and rushes to hug her.

Meanwhile, Arjun gets a call from someone and tells them that no one is in a coma.

© Copyright tellybest.com, 2022, 2023. All Rights Reserved. Unauthorized use and/or duplication of any material from tellybest.com without written permission is strictly prohibited.
Cached Saved on: Monday 21st of November 2022 11:22:39 PMCached Disp on: Thursday 1st of December 2022 11:18:46 AM