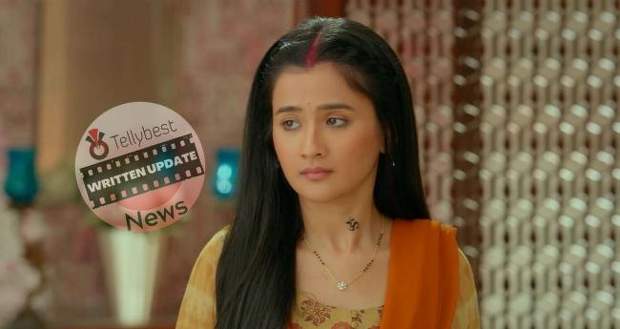 Today's Rajjo 21st October 2022 episode starts with Arjun not being able to fall asleep as he keeps thinking about Rajjo sleeping outside his room.

He goes to Rajjo and tells her to go and sleep in one of the guest rooms but she refuses saying that she'll stay close to him and will protect him.

On the other hand, Urvashi's mother calls her and scolds her while reminding her that she has to win over both Arjun and his wealth at any point.

Further, Rajjo wakes up and goes to her work in the early morning while Arjun thinks that she's going to sleep in the guest room.

Meanwhile, Madhu and the rest of the ladies do the ritual of Sargi as Madhu gives Sargi to Urvashi claiming her to be the daughter-in-law of the house.

Just then, Rajjo passes by and Madhu stops her and makes her pick up all the utensils.

Rajjo takes the dirty utensils in the kitchen and uses them to do her own Sargi states that she'll keep the fast for Arjun.

Later, Rajjo is doing her work with speed and impresses a man who gives her the card of a sports academy and advice her to join.

However, Rajjo says that she doesn't have time or money for it as she has responsibilities to take care of and leaves from there.

Afterward, Rajjo gets her first salary and she gets happy while Arjun sees her and thinks of her as greedy.

Meanwhile, Pushkar talks to Urvashi and blackmails her into doing her part of the work so that the pillar falls on Rajjo when everyone will be celebrating Karvachauth.

Later, Pushkar goes to Manorama's hospital room to threaten her when he hears Rajjo and hides behind the curtains.

© Copyright tellybest.com, 2022, 2023. All Rights Reserved. Unauthorized use and/or duplication of any material from tellybest.com without written permission is strictly prohibited.
Cached Saved on: Monday 21st of November 2022 06:18:38 AMCached Disp on: Wednesday 7th of December 2022 12:09:50 PM