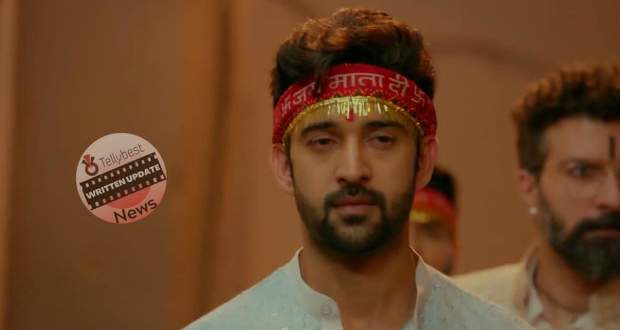 Today's Rajjo 21st September 2022 episode starts with Pushkar arriving early morning to take back Manorama and Rajjo but she asks for a favour from him.

Rajjo requests him to get her and her mother a job to live in Lucknow as her village is destroyed.

Meanwhile, furious Pushkar insults Rajjo for being illiterate but she expresses her strong determination to work and get independent.

At the same time, Manorama stops Rajjo from asking for a job and Pushkar warns Rajjo about the extreme heat in factories.

However, Rajjo exclaims she has the same thick flesh as Pushkar and he gets shocked by her statement.

At the same time, Arjun assures her to get Rajjo a job and requests her to rest and get healthy first.

Later, Manorama scolds Rajjo but she accuses her Maai of not telling anything about her past.

Rajjo tells Manorama that she has loved her phase of running in the sports academy and now it's her turn.

In the living, Madhu accuses Arjun of helping Rajjo boundlessly but he informs them that she will live in an outhouse and work in the factory.

However, Urvashi asks Arjun where she will live if Rajjo will live in an outhouse and Arjun advises her to live in the house before marriage.

Everyone gets shocked and Arjun accuses the family of being hypocrites and not helping the needy.

Hearing Arjun’s words, furious Madhu calls Rajjo a scorpion who will betray him and kill him with her venom.

In the storeroom, Arjun gets Rajjo and Manorma a job and she assures him that she will do something big in her life.

At the same time, Manorama interrupts Arjun and refuses her job offer and calls Nangu Kaka inside.

Meanwhile, Madhu and Urvashi enter and get happy seeing Vicky.

At the same time, Rajjo meets Vicky and Nangu Kaka happily but Manorama declares her marriage to Vicky.

Rajjo and Arjun get shocked and Madhu takes Arjun out of Rajjo’s matters.

However, Arjun’s eyes are filled with anguish and Rajjo watches Arjun standing in the doorway.

At the same time, Vicky makes creepy remarks about Rajjo’s figure and Arjun takes Vicky out of the room to give Rajjo and Manorama space.

Later, Rajjo accuses Manorama of setting up her marriage without asking her and declares she will not marry Vicky.

Meanwhile, Arjun is suspicious of Vicky and thinks he is hiding something from everyone.

On the other hand, Manorama orders Rajjo to marry Vicky.

© Copyright tellybest.com, 2020, 2021. All Rights Reserved. Unauthorized use and/or duplication of any material from tellybest.com without written permission is strictly prohibited.
Cached Saved on: Saturday 1st of October 2022 10:46:05 PMCached Disp on: Sunday 2nd of October 2022 12:23:34 AM