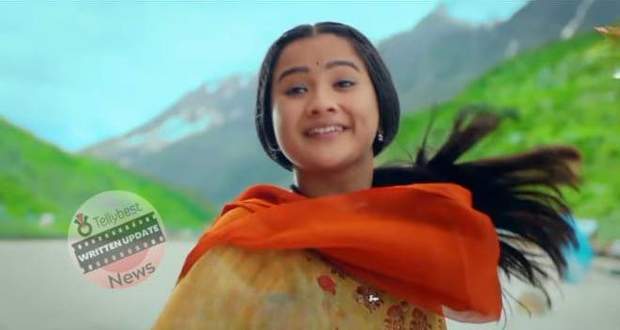 Today's Rajjo 22nd August 2022 episode starts with the sun rising on the horizon and beaming its light on the magnanimous hills filled with trees.

A girl enters the beach doing backflips and gets scared seeing her Maai rowing a boat onto the shore.

She complains to her Bhole Baba for making her mother work so hard.

Maai sees Rajjo and calls her to help her with a basket full of fish.

Rajjo sees Maai's wounded feet but her mother tells her to not see the worker's feet.

Maai tells Rajjo about the fair of ‘Sawan ka Somwar’ held in the village today excitedly while Rajjo only requests a pair of shoes for her mother.

Rajjo asks for something to eat from the sea sadly and gets an apple from Maai.

Maai puts a basket full of fish on Rajjo’s head to sell them and orders her to not sprint unless she wants to get thrashed.

Rajjo sprints into the city with a beaming smile and helps the city people while the competitors get jealous of her reaching the Kothi to sell fish the earliest.

Meanwhile, a man lowers his parachute to the ground and meets his friends waiting for him on the ground.

Arjun informs his friends of going to Neeltaal to promote their manure business at the fair held there.

Meanwhile, a glacier breaks making a thunderous voice and massive waves of water.

Rajjo takes damru from her Kaki who works as a watchman and discusses her commission of getting 100 rupees.

On the other hand, engineers are watching the increasing water level in fear of dam breaking.

The fair was held on the corner of the river shore bustling with the crowd of visitors from nearby villages.

Rajjo sells damru and sees a pair of shoes and prays to Bhole Baba to show her a way to get shoes for her Maai.

Meanwhile, Arjun enters with Sarpanch and a box of shoes in his hands while talking with his mother on call.

The people call him Khan Babu but Arjun doesn’t like it and makes their way to the fair.

Rajjo is dancing holding a damru in hand and accidentally releases it and it hits Arjun in his head.

Rajjo hides in a wooden Almirah while Arjun comes toward the Almirah but gets distracted by a damru lying on the floor.

Meanwhile, Rajjo tries to escape and breaks Arjun’s phone in the process.

Arjun catches Rajjo but she escapes by sprinting.

Manorma (Rajjo's mother) worries for Rajjo and goes to take her back from the fair because of the weather.

At the same time, Madhu (Arjun's Mother) requests Arjun to come back as she is worried about him.

Madhu talks with her husband worrying about past repeating leading her on the verge of losing her children again.

At the same time, Rajjo finds a banner of a race with a prize being a pair of shoes.

Meanwhile, Manorma recalls Ojha Sir insulting his relationship with her while she was pregnant with Rajjo and throwing her out of the sports academy despite being selected as a National Athlete.

Rajjo decides to sprint while Maai declares she will never let Rajjo sprint.