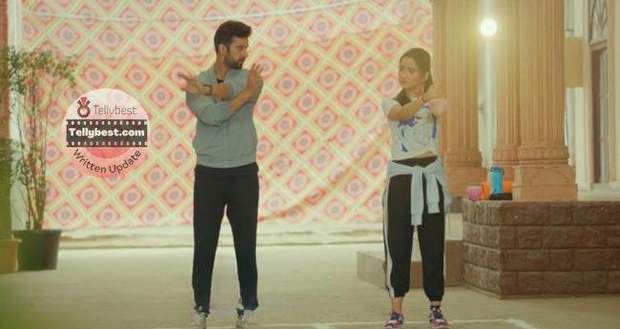 Arjun's eyes are fixed on Rajjo as she comes up with him holding her legs.

He then offers her a drink which Rajjo gulps down but the remaining liquid gets stuck on her upper lips.

Arjun smiles and swipes it away with his finger and then instructs Rajjo on how to get ready before the race.

He shows her how to keep her hands while in get, set go mode.

While entering the Thakur House together, Rajjo tells Arjun that he need not put all his attention on her and can focus on his work.

Arjun breathes out a tired sigh and asks Rajjo if this was her way of telling him thank-you.

He then suggests Rajjo join Pushkar's academy as she needs a proper trainer to train her every day.

Rajjo says Pushkar won't take her in but Arjun states he will talk to him.

However, Madhumalti walks, fake smiling, at Rajjo and reveals that nobody has eaten yet and is waiting for Rajjo to cook something sweet as it will be her first Rasoi.

Madhumalti tells Rajjo that now she is this house's Bahu, and it is her responsibility to overlook everything while Arjun internally speaks if Rajjo starts playing Ghar-Ghar, who will run then?

Meanwhile, Bunty gets scolded by Pushkar for his dimwit while Pushkar informs that Arjun has asked for his help to get Rajjo into the academy and he wants to take full advantage of this to discard Rajjo from the game.

On the other hand, Madhumalti asks Rajjo to cook sweets from wheat but Rajjo says that they are sweet on the outside but sticky on the inside.

Madhu's smile fades away for a second while Rajjo's comment matches her internal nature.

After Madhu goes away, Rajjo panics as she hasn't cooked this much alone.

Meanwhile, Pushkar visits Thakur House and asks Madhumalti why she is playing the sweet mother-in-law when Arjun has to consummate with Rajjo.

They both talk against Rajjo while Kalindi and Swara go inside the kitchen to tease Rajjo.

They intentionally comment that Rajjo looks tired and an innocent Rajjo reveals that Khad Babu tired her out.

However, this makes both of them giggle and they refuse to help Rajjo.

Rajjo then seeks Manorama's help and goes running to her.

Meanwhile, Jhilmil stops Swara and asks what happened with Madhumalti on the day Arjun's marriage with Urvashi got canceled.

Swara reveals that Madhu was talking to their Guru Ma on the phone but does not know further.

Jhilmil insults her by calling her a cow.

Rajjo sees Manorama packing and freaks out that she is leaving her.

Manorama calms her down and reminds her that she is a married woman and should show her Rajjogiri in the house as she shows on the ground.

Rajjo says that even though she worked as a house help, she only peeled onions and garlic but do not know how to make the food these people eat.

Manorama asks Rajjo not to compare herself to iron and treat the rich as gold since an iron lock is needed to protect the gold.

Manorama urges her to make something she likes and make everyone taste it and Rajjo smiles.

However, once Rajjo enters the dining area after changing and showering, she sees that food is already set on the table.

Madhumalti then reveals to Rajjo that she ordered everything because she felt she put too much pressure on Rajjo.

Meanwhile, Arjun curiously thinks that how come Rajjo knows to cook all this variety kept on the table.