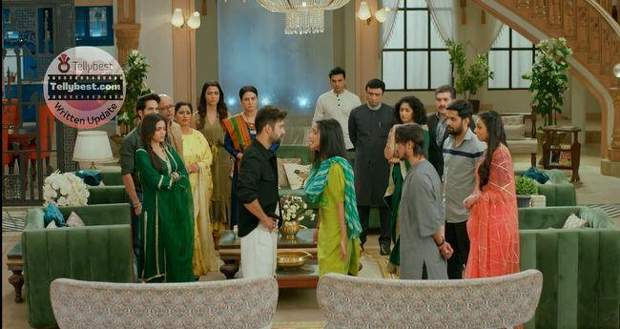 Arjun calls Madhumalti and tells the whole family that Manorama is not in a coma and is walking around like a normal person.

Rajjo hugs Manorama tightly in her arms and tells her how she was worried about her this whole time.

However, Manorama pushes away Rajjo from herself and asks her if she is trying to find someone there.

Manorama walks past Rajjo and begins to pick flowers while Rajjo tries to process the unusual behavior of Manorama.

Arjun decides to do the worst with Rajjo as he is past his patience limit and announces that he will call the police.

Urvashi gets scared after hearing about the police while Madhumalti tells Arjun that they do not want any police involvement with their family.

Urvashi and Madhumalti ask Arjun to throw Rajjo out of the house as that will much will be enough for them.

However, Arjun says he will not be satisfied with that much and plans something big as he leaves.

Meanwhile, Rajjo constantly requests Manorama to remember her and tells her that she is her daughter.

Manorama refuses to remember anything and asks Rajjo to go away from her or else she will throw stones at her.

As Manorama attempts to walk away, Rajjo stops her by holding onto her feet and requests her to try to remember her.

Manorama dies inside while acting so cruelly with Rajjo but does not let her emotions take over her stern face as she needs to do it to save Rajjo’s life.

Manorama recalls Pushkar’s words about killing Rajjo and thinks that not recognizing Rajjo is the best she can do.

Pushkar observes Manorama and Rajjo from a distance and thanks god for helping him by altering Manorama’s mind.

Manorama leaves with Rajjo crying on the ground and crying by herself in private as she has no other choice.

Rajjo requests the doctor to cure Manorama but he asks Rajjo to leave as her presence can trigger Manorama’s health.

Later, Urvashi thanks Pushkar for arranging everything which made Arjun believe that Rajjo is lying about her mother.

© Copyright tellybest.com, 2022, 2023. All Rights Reserved. Unauthorized use and/or duplication of any material from tellybest.com without written permission is strictly prohibited.
Cached Saved on: Tuesday 22nd of November 2022 11:30:28 PMCached Disp on: Tuesday 6th of December 2022 12:07:20 PM