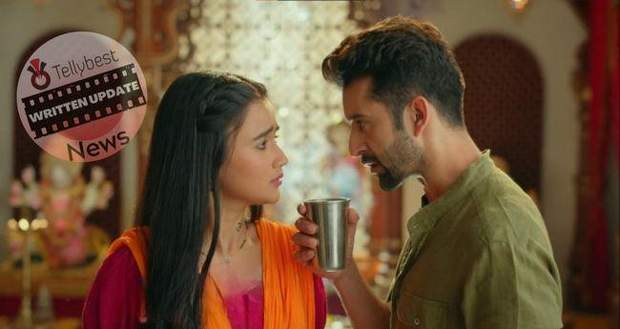 Today's Rajjo 22nd October 2022 episode starts with Rajjo sitting beside Manorama and happily talking about her first salary and the first job that she got due to her running.

Meanwhile, at the Thakur mansion, Urvashi is outside trying to talk to Madru (Pushkar's man) when the loan shark to whom her father owes money comes there.

Urvashi gets shocked as she tries to convince them to leave when Madhu comes there and questions her.

Feeling cornered, Urvashi quickly comes up with the lie that the thugs are her uncles.

Back at the hospital, Rajjo notices the shoes and goes towards the curtains when she hears Manorama's heart rate monitor beeping.

Pushkar takes this opportunity to escape and leave his shoes there as Rajjo had already seen the shoes.

Meanwhile, Rajjo goes back to the curtain and wonders how Pushkar's shoes ended up in Manorama's room.

Urvashi forms a lie and tells them that they are still unhappy because of what happened on the marriage day.

Just then, Rajjo comes there and gets shocked to see the loan sharks at the Thakur house and being introduced as Urvashi's uncles.

However, before she can say anything, Madhu calls her out and tells her to do all the work since it's Karvachauth and the ladies of the house are resting.

Later, Rajjo tells about the loan sharks to Kalindi who get excited and says that they need to find out their purpose for entering the Thakur mansion.

Afterward, Rajjo tries to eavesdrop on Urvashi and the loan shark's conversation but gets distracted by Chirag and fails to hear anything.

All this while, Arjun is spying on her and wonders why she is collecting money and spying on Urvashi.

Further, Arjun confronts Rajjo and degrades her while she feels insulted by his ensuing words.

© Copyright tellybest.com, 2022, 2023. All Rights Reserved. Unauthorized use and/or duplication of any material from tellybest.com without written permission is strictly prohibited.
Cached Saved on: Monday 21st of November 2022 08:35:12 AMCached Disp on: Thursday 1st of December 2022 12:20:47 PM