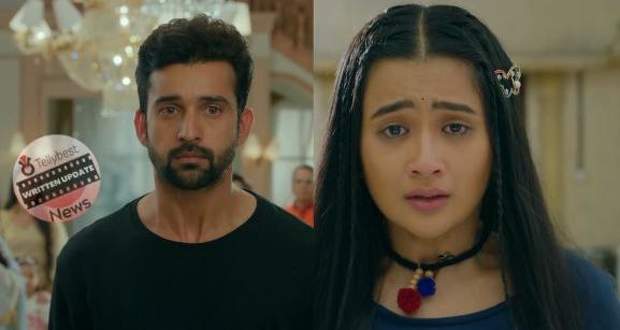 Today's Rajjo 22nd September 2022 episode starts with Manorama making Rajjo understand the importance of marriage and orders her to get married to Vicky.

As expected, Rajjo defies Manorama but she doesn’t listen to her.

On the other hand, Pushkar bribes Vicky to marry Rajjo and take them back to Neeltaal.

After Pushkar leaves, Vicky gets shocked seeing Arjun but lies to him and goes inside while Arjun suspiciously glares at Vicky.

In the storeroom, Rajjo accuses Manorama of not letting her follow her dream but she emotionally blackmails her daughter.

However, furious Manorama tells Rajjo to fulfil her dreams after marrying Vicky as she can live in the city with him.

Rajjo glares at Manorama and suspiciously accuses her of hiding something.

At last, Manorama declares Rajjo to marry Vicky so nothing wrong can happen to her.

On the other hand, Urvashi plans her honeymoon in the US with Arjun and he agrees to her request.

Ecstatic Urvashi confesses her love to Arjun but he skulkingly reciprocates her love.

In Madhu’s room, Pratap teases Madhu for preparing a bundle of cash for Rajjo while Madhu is happy about getting her son back.

Madhu expresses her happiness at Urvashi and Arjun’s marriage but at the same time, her heart is still feeling uneasy.

In the living room, Chirag hugs Arjun and advises him to sort out his feeling and never ignore them.

At the same time, Manorama and Rajjo come out and greet him and Madhu calls Rajjo.

Giving a side-eye to Arjun, Madhu blesses Rajjo to live a happy life with Vicky and Rajjo apologises to her for making her life difficult.

Rajjo assures Madhu about praying for Khan Babu’s wellbeing every day and Manorama thanks everyone for taking care of her daughter.

Meanwhile, Madhu indirectly tells them to go out and gives Rajjo the bundle of cash as her wedding gift from Arjun.

Just then, Chirag, Swara and Siya give a mobile phone, bag and a pin to Rajjo.

Seeing Rajjo go, Arjun's heart fills with remorse as he wasn’t able to fulfil her dream.

© Copyright tellybest.com, 2020, 2021. All Rights Reserved. Unauthorized use and/or duplication of any material from tellybest.com without written permission is strictly prohibited.
Cached Saved on: Saturday 1st of October 2022 10:18:55 PM