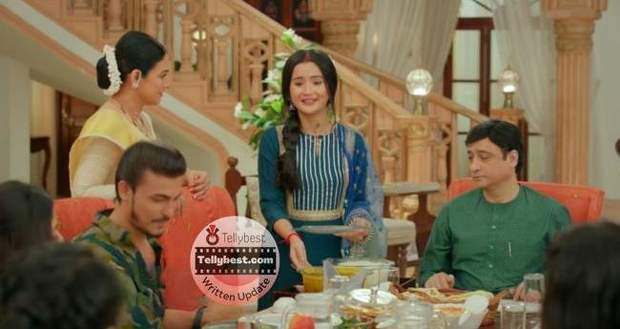 Today's Rajjo 23rd December 2022 episode starts with the Thakur family appreciating the food while Rajjo stands with a saddened face.

Swara and Kalindi tease Rajjo and ask for the recipe for the food.

Sia cutely replies that she will ask Rajjo chachi and tell her the recipe in her ear.

However, Rajjo interrupts them and reveals that she doesn't know how to cook these kinds of food and Madhumalti ordered the food.

Rajjo apologizes to Madhumatl as she cannot lie and everyone gets shocked and looks at her.

Later, Rajjo interrupts Madhu and states she has made pahadi food for everyone and Chirag excitedly requests her to bring that food.

Even Arjun nods his head for food and urges Rajjo to bring food with a subtle smile.

Rajjo is bringing the food tray from the kitchen but suddenly stumbles and Arjun holds the tray stabilizing her.

Arjun brings the food tray with Rajjo and she excitedly tells everyone that Manorama used to make this dish from leftover fish back in Neeltal.

Rajjo praises her Maai’s cooking and states she made food for her family with lots of love.

However, Jhilmil taunts Rajjo in a whisper that the Thakur family’s standard is decreasing day by day now.

To refrain Rajjo from feeling bad the family eagerly take out their plates and Arjun urges Rajjo to put food on her plate.

When Rajjo puts food on his plate they both hold the plate and get lost in each other’s eyes.

Chirag teases them and clicks a photo of the moment.

Later, the family tries the food and starts coughing badly but everyone praises Rajjo.

Rajjo realises that the spice level of food is too high for the family.

Arjun requests Rajjo to give chillies separately next time and everyone laughs at his comment.

Rajjo distributes jalebis to extinguish the flaming mouths while Pushkar enters the house.

Arjun welcomes Pushkar and Madhu excuses herself and walks to Manorama who is watching the event sneakily from behind the pillar.

Madhu knows Manorama will not like Pushkar entering the house so she tries to keep her mouth shut.

She acts like a helpless mother who cannot break Arjun’s heart and begs Manorama not to say anything to Arjun about Pushkar.

Manorama agrees to her request and Madhu smirks as her plans are going accordingly.

On the other hand, Arjun takes Pushkar aside and requests him to enrol Rajjo in his sports academy.

When Pushkar calls Rajjo Ghanti, Arjun requests him to call his wife Rajjo only as she has equal respect in the household.

Pushkar bites his teeth and urges Arjun to drop the idea of making her a runner.

However, Arjun confidently exclaims that Rajjo is capable enough to become a runner.

Pushkar challenges Arjun that Rajjo needs to defeat the player who won 400m with the highest 48.9-second record.

He calls Arjun his wife’s puppet for thinking she can break this record and goes away.

Later, Pushkar and Manorama crash in a secluded corridor and they both argue with each other.

Manorama threatens Pushkar to not say one word against Rajjo else she will break his alluring face.

When Manorama is walking away, Pushkar flirtily informs her that Arjun is requesting him to enrol Rajjo into his sports academy.

Manorama gets shocked and Pushkar threatens her that Rajjo will not cross the finish line but her lifeline.

© Copyright tellybest.com, 2022, 2023. All Rights Reserved. Unauthorized use and/or duplication of any material from tellybest.com without written permission is strictly prohibited.
Cached Saved on: Wednesday 25th of January 2023 08:48:13 AMCached Disp on: Thursday 9th of February 2023 04:39:04 AM