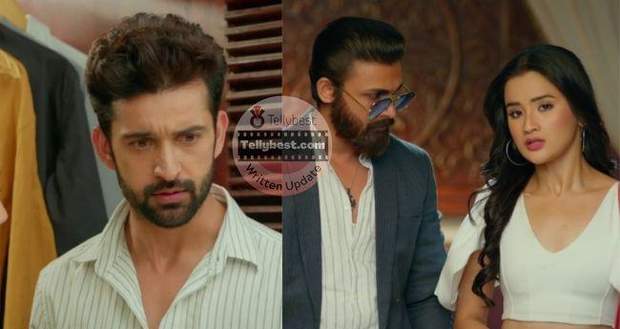 Today's Rajjo 23rd January 2023 episode starts with Manorama announcing that Thakurfamily is not good for Rajjo.

Earlier that day, looking at Guru ma, Rajjo thinks of slapping her but calms down at the last moment.

Rajjo tells herself in her mind that it is not the right time to blow her cover and informs Guru ma that they just want their aunt’s money.

When Rajjo takes Guru ma’s blessing, her mangal sutra falls to the ground and Guru ma picks it up.

Guru ma asks Rajjo that to whom the mangalsutra belongs since Rajjo is single and Rajjo lies in her fake accent that this is for a goddess.

Even Chirag yells that Rajjo worships God every Monday since she is crazy about marrying a good groom.

Looking at Rajjo’s forehead, Guru maa yells at her guards to stop them when Rajjo and Chirag turn to leave.

When the guards capture Chirag, he orders Rajjo to run with the phone to save the recording.

Meanwhile, in Thakur mansion, Pratap urges Arjun to stay and tell them the reason why he is going U.S.A and one by one, other family members also plead with Arjun.

When Sia begs Arjun to stay, Arjun tells her that he will take her to Disneyland soon but Sia mentions that she does not want to go and that Rajjo will be heartbroken if Arjun walks away.

Looking around, Kalindi also calls for Rajjo and a family member informs her that Rajjo has gone somewhere with Chirag.

Meanwhile, Guru ma and her goons chase Rajjo while Chirag runs behind them.

Later, in Thakur's mansion, as Arjun is about to leave the house, all the family members hold his hand to stop him when Pratap announces that he will let Arjun go only if he reveals the reason behind it.

Arjun looks at Madhumalti without uttering any words, causing Madhu to shamefully lower her eyes.

Realizing Madhumalti knows the reason, Pratap orders her to tell him the reason behind Arjun’s leaving but Madhumalti does not say anything.

Madhumalti jerks her head in shock as Pratap scolds her in a loud voice while everyone stands there still.

Meanwhile, Guruma and her goons capture Rajjo but she starts laughing after finding Chirag behind the car.

Chirag then reveals that he switched the real phone with Rajjo's while they were running and Rajjo announces that as Rajjo’s phone was a toy phone, Guru ma’s metal detector was not able to detect it.

At the same time, the police arrive there to arrest Guru ma and her goons.

In the meantime, the whole Thakur family comes out of the house to witness Guru ma, and her goons, Rajjo and Chirag.

Looking at Guruma, the color drains from Madhumalti’s face, and when Pratap asks her why she is wearing a western dress, Rajjo reveals that she and Chirag went to discover the truth behind Arjun’s leaving.

Rajjo even tells Arjun that his plan of going to the U.S.A is canceled while Arjun looks surprised.

Once everyone gathers in the hall, Rajjo plays the video which reveals Guru ma's fraud and how she looted Madhumalti by making her believe that Arjun's life is in danger.

The police then drag Guru ma away and Arjun reminds Madhumalti that he told her beforehand that her blind faith in black magic will ruin her reputation in the family.

While Manorama is sobbing hearing the news about Madhu trying to use Rajjo for her own benefit, Madhumalti stands there in shame.

© Copyright tellybest.com, 2022, 2023. All Rights Reserved. Unauthorized use and/or duplication of any material from tellybest.com without written permission is strictly prohibited.
Cached Saved on: Wednesday 25th of January 2023 09:02:03 AMCached Disp on: Sunday 5th of February 2023 03:17:05 AM