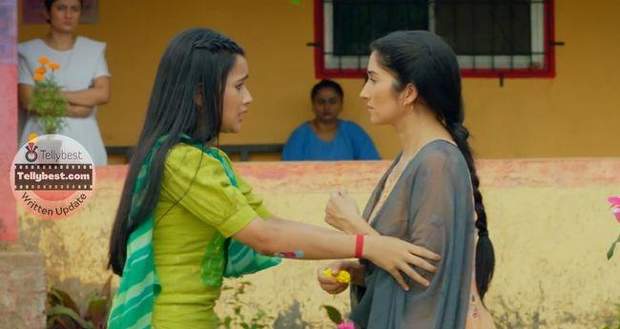 Today's Rajjo 23rd November 2022 episode starts with Rajjo coming inside from the back door and searching for her medal in her bag and rushing back.

However, she collides with Arjun who stops her from falling down.

The chemistry between them is evident in their movement and their magnetic pull towards each other.

Rajjo tells him that she has no time for his questioning while Arjun tells her that this is the right time to talk.

He tells her that she will have to prove herself by trusting him.

He asks her to sign the papers without asking questions.

However, Rajjo signs the papers without enquiry and tells him that she has nothing so expensive that he would want from him.

Later, Arjun tells her that the papers she has signed are the annulment papers where he has written that Rajjo Thaki has forcefully kept him married to her.

Rajjo looks shocked to hear the news while Arjun continues saying that he is now a free man and can marry Urwashi and make her his wife.

Rajjo feels the effect of Arjun’s words while Arjun mocks her telling her to bear the pain as he has been bearing.

Rajjo tells him that she has proved that she trusts him implicitly while he has proven that he will always choose wrong over right.

Telling him to do as he likes, she tells her that there is nothing that she can do about him if he wants to ruin his life.

She tells him that she should also move in her life and can see where his marriage to Urwashi will take him.

Rajjo also tells him that she will pray to God for his well being but a little more for herself.

As Rajjo is about to leave, Arjun holds her to her promise reminding her that she has promised to do and say everything he wants.

On being asked, Arjun tells her to watch him see marry Urwashi and participate in his wedding functions.

Rajjo tells him that she has no interest in who he marries and who dances at his wedding all she cares about now is going to her mother.

However, Arjun calls her mother's amnesia an act and says that nothing has happened to her.

She tells him to think whatever he likes but lets her go.

However, Arjun tells her that she cannot go until she keeps her promise and sees him wed to Urvashi.

In the living room, Jhilmil accuses Rajjo of being very smart.

Meanwhile, Arjun comes with Rajjo dragging her with him and tells his mother to start preparing for his wedding as he is going to marry Urvashi.

His mother tells her that if that was so easy they would have thrown her out of the house the day she came.

However, Arjun tells her that now there will be no problem as he has had her sign the annulment papers from her.

Jhilmil hugs Madhumalti for her son’s divorce and begins to sing and dance while Rajjo feels the pain of her joys.

Pushkar is delighted to hear the news and feels like dancing.

Meanwhile, Madumalti asks Arjun to get rid of Rajjo completely while Jhilmil and Urwashi tell him to kick her out of the house.

Chirag gets angry and threatens Urwashi for daring to touch Rajjo.

Urvashi feels offended and tells him that she has not said anything wrong and this is what Arjun wants as well.

However, Rajjo tells her that this is not going to happen as her baby will not let her go even if she wants to.

Urvashi looks shocked and asks Arjun if Rajjo is right.

Arjun tells everyone that Rajjo is right and she will not go anywhere from the house.

© Copyright tellybest.com, 2022, 2023. All Rights Reserved. Unauthorized use and/or duplication of any material from tellybest.com without written permission is strictly prohibited.
Cached Saved on: Wednesday 23rd of November 2022 11:18:48 PMCached Disp on: Monday 5th of December 2022 01:05:51 AM