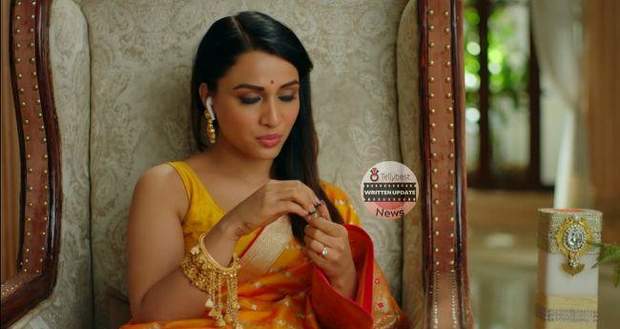 However, Arjun calls her a Chipku and tells her to not spy on Urvashi anymore while Rajjo makes fun of him.

She reminds him that he has given her many names but doesn't call her by even one as he ignores her every chance they are together.

Arjun starts humiliating her by telling her that he has lost his nice side because of her and tells her that he never used to insult or make names for any girls in his whole life.

Further, Arjun takes a note from his wallet and waves it around his head saying that he has cast off the evil eye from himself that she put.

He puts the note in Rajjo's hands and leaves telling her to keep the money since she wants it.

Rajjo feels humiliated and insulted but she keeps her composure and gives the money to another maid while telling her to pray for Arjun.

On the other hand, the Thakur family sits in the living room while Chirag sits beside Kalindi and tells her to not keep the fast and tell him if she needs anything to eat.

Kalindi smiles to herself thinking that Chirag is worrying about her and tells him that she is keeping the fast for his long life only.

However, Chirag tells her to not do extra work since he is trying to shorten his life by consuming alcohol.

Afterward, Arjun comes to the living hall and gets shocked to see Rajjo entering the house with a lot of things.

He angrily calls her names and tells her to remove the items or else she will drop them and waste them.

Just then, Urvashi comes there and takes away Arjun while Rajjo looks on annoyingly.

Further, Pankhudi tells the family members that she will make the couples play the compatibility test.

Rajjo keeps looking at Arjun while Madhu notices it and gets angry as she orders her to bring the paper and pen for the game.

Meanwhile, Mukund tells Swara that he will make her win while thinking that he will do everything as Jhilmil says to get the family business.

Madhu and her husband guess the answers correctly while the remaining couples lose except for Urvashi and Arjun.

Madhu further tells her to reveal what they have written.

© Copyright tellybest.com, 2022, 2023. All Rights Reserved. Unauthorized use and/or duplication of any material from tellybest.com without written permission is strictly prohibited.
Cached Saved on: Monday 21st of November 2022 07:37:24 AMCached Disp on: Thursday 1st of December 2022 01:46:22 AM