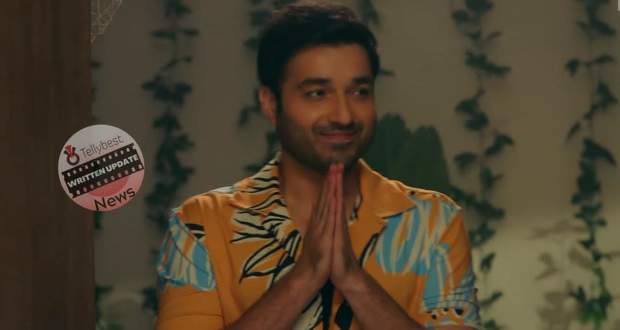 Today's Rajjo 23rd September 2022 episode starts with Manorama telling Madhu that now it is time for her and her daughter Rajjo to leave.

Madhu sees the eye contact between Rajjo and Arjun which makes her even more angrier.

Making both of them get out of the house, Madhu closes the door and looks at Arjun who thinks about sneaking in to meet Rajjo.

Later, Arjun goes to his room and feels lonely when he hears Rajjo's voice.

He tells her that he's glad he got to see her before she goes back to her home while she tells him that she could not leave without talking to him first.

Afterward, Rajjo holds Arjun's hands as she tells him that she's grateful to him and thanks him for helping her and taking care of her.

At the same time, Arjun gets emotional but holds back his tears and tells Rajjo that he is glad he found her.

She also smiles as she tells him that it is time she should leave as Manorama is waiting for her downstairs and turns.

However, before leaving, Rajjo makes smiles with her dupatta and tells Arjun that she is giving it to him so that he can keep it as a memory.

Before Rajjo can leave, Arjun stops her and asks her if she's happy with the marriage.

Seeing the answer on Rajjo's face, Arjun tells Rajjo that he knows she doesn't like Vicky and shouldn't marry him.

Rajjo walks towards the emotional Arjun and tells him to consider Manorama agreeing to live in the city as his half win and celebrate it.

Arjun subconsciously blurts Rajjo to not leave the house as she cries while Rajjo tells him that she has to.

Recalling the phone Chirag gave to Rajjo, he tells Rajjo to call him if anything happens and she agrees.

She calls him Arjun Babu instead of Khan Babu which makes him seem even more distant from her than they already are.

Finally, Rajjo hugs Arjun as a final sign of their goodbye and they both go downstairs.

Arjun looks on with red-rimmed eyes as Rajjo gets in the car and leaves with Manorama and Vicky.

Arjun goes inside and lays his head on Madhu's head while she stops her work and starts stroking his hair.

He recalls Vicky's moments and sits up in nervousness.

Madhu tries to distract him by telling him to make a list with her but Arjun leaves.

Later, Arjun tries to call Rajjo when he overhears two guys talking about Vicky taking everyone somewhere else and rushing out of the house.

© Copyright tellybest.com, 2020, 2021. All Rights Reserved. Unauthorized use and/or duplication of any material from tellybest.com without written permission is strictly prohibited.
Cached Saved on: Saturday 1st of October 2022 09:01:48 PMCached Disp on: Sunday 2nd of October 2022 12:52:52 PM