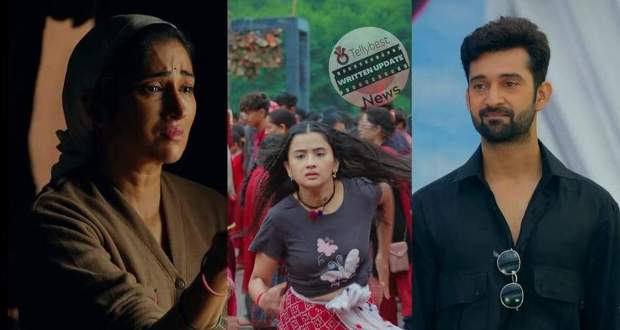 Arjun runs to the stage to pick up the remaining documents and sees Rajjo running towards the shore and trying to stop the stupid girl.

However, Sarpanch stops Arjun and advises him to get out of the chaos.

Rajjo runs to an arch decorated with bells and saves the child hanging on it by climbing on the arch and falling on the mattress made by a banner to cushion their fall.

On the other hand, Manorama (Rajjo’s Mother) is running into the angry shore as she couldn’t let her boat submerge.

Manorama stands in the boat and thanks Rajjo for the shoes but lightning thunders and she stumbles into the river.

In Arjun’s home, Pushkar (Kalindi’s Father) assures Madhu (Arjun’s Mother) that he is going to help the Thakur family whenever he can as he is Kalindi’s father and Jhilmil’s brother (Jhilmil is Arjun’s aunt).

Rajjo jumps into the shore sneakily from the police and gets shocked to find the boat upside down.

A shard of glass pierces into Rajjo’s feet while she cries out in pain and she sees Manorama's footprints.

Meanwhile, Arjun is holding his waist in pain as he forgot to take his medicine but bears the pain and starts to help the people to his guest house.

In Rajjo’s house, Manorama is putting money into the damru and worrying about Rajjo finding her on the shore.

The water starts to seep into the village with great force.

Rajjo reaches home and hugs her Maai while she assures Rajjo that they just need to go to a high altitude.

Fire ignites in Rajjo's house while they try to get out.

On the other hand, Arjun’s medicine is finished and his phone is not working due to calamity.

In Arjun’s home, Madhu (Arjun’s Mother) is crying her eyes out with her worry as the news is referring to the calamity as the deadliest one.

Meanwhile, Manorama advises Rajjo to stick to the pillar and binds the Trishul to Rajjo with her medal while she goes to find help.

Rajjo screams at her mother and tells her no one will come but Manorama doesn’t listen and leaves Rajjo’s hand.

Suddenly a massive wave of water comes and washes Manorama  away while Rajjo screams at the painful separation.

The night goes by, Rajjo wakes up submerged to her waist and sees her mother’s medal and finds out she was an athlete.

Rajjo starts to scream for help but she doesn’t have much hope as her body is getting numb.