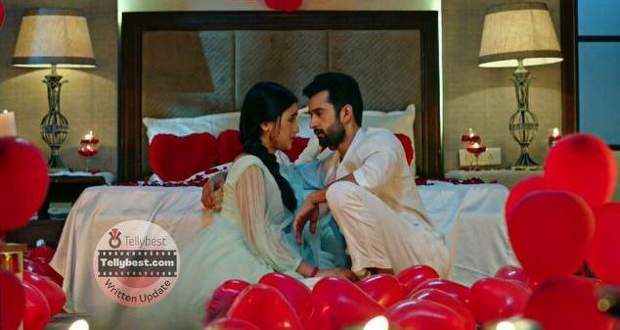 Today's Rajjo 24th December 2022 episode starts with Arjun spotting Rajjo seeing something on her phone while rotating on his chair and approaching her.

Arjun starts to rotate the chair with Rajjo and asks her to experience what moving in a circle feels like.

Rajjo asks Arjun to stop messing with her but Arjun continues to rotate the chair while laughing at Rajjo.

Rajjo pulls Arjun close to her by holding onto his coat and asks him to shut up with his face a few centimeters apart.

Meanwhile, Madhumalti asks Pushkar why he is continuously ruining her plan to unite Arjun and Rajjo.

Pushkar says that it was Arjun who came to him for Rajjo’s admission so he could not say no to him.

Madhumalti tells Pushkar to do something that will erase Rajjo’s running dream forever or her objective will not be fulfilled.

Pushkar huffs in anger upon hearing Madhumalti’s words and thinks about what he can do to stop Rajjo’s running passion.

In Arjun’s room, Arjun and Rajjo’s intense moment gets interrupted by a call on Arjun’s mobile.

Rajjo says that she was looking at the previous records and athletes from Pushkar’s academy as she needs to break their records.

As Arjun tries to motivate Rajjo, she says that she does not have money to fulfill her dream.

Arjun asks Rajjo why she is thinking about those things as his money belongs to her as his wife.

Rajjo says that she cannot accept Arjun’s money as she has to fight alone on this journey without anybody’s help.

Arjun explains to Rajjo that being a husband-wife does not mean only sharing a room, but happiness, sadness, and responsibilities too.

Arjun says that he views this relationship as a dutiful husband and wants to be there for his wife as much as possible.

Seeing that Rajjo is not ready to take his help, Arjun writes down the expenses in a notebook and asks Rajjo to return the money to him when she becomes a famous athlete.

Manorama comes to talk to Rajjo about Pushkar’s academy but hears Rajjo telling Arjun that she will get accepted in that academy at any cost.

Hearing that, Manorama decides that she needs to talk to Rajjo as soon as possible.

Later, at night, Rajjo practices by herself and gets frustrated about not breaking the previous record.

Manorama asks Rajjo not to practice so hard in the middle of a winter night as she is not accustomed to that weather.

Rajjo asks Manorama to go away as her words are not helping her to get motivated.

Manorama asks Rajjo not to trust anyone in Pushkar’s academy as she has not seen the ugly world yet.

After Manorama leaves, Arjun comes and spots Rajjo practicing hard and gets worried about her.

Arjun asks Rajjo to rest for today and carries her in his arms as she denies following his command.

Madhumalti spots Arjun carrying Rajjo inside and attempts to go behind them but Pratap stops her.

Making Rajjo lie on the bed, Arjun asks her to go to sleep so that she can prove herself in the practice the next day.

Madhumalti comes later and gets angry about seeing Rajjo and Arjun sleeping separately.

The next morning, Madhumalti creates a scene and announces that Pushkar’s academy has been shut down for the next month.

Arjun and Rajjo get shocked to hear such news as she was supposed to enter that academy.

© Copyright tellybest.com, 2022, 2023. All Rights Reserved. Unauthorized use and/or duplication of any material from tellybest.com without written permission is strictly prohibited.
Cached Saved on: Wednesday 25th of January 2023 11:47:52 AMCached Disp on: Wednesday 1st of February 2023 05:36:49 PM