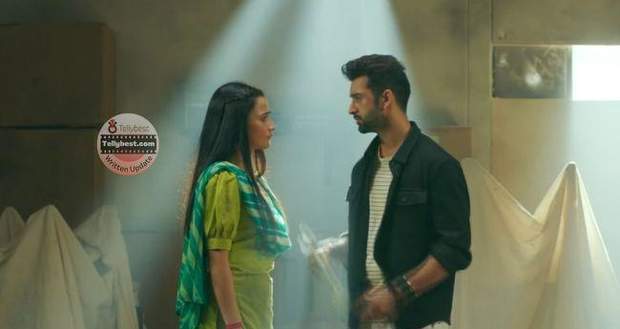 However, Arjun tells Madhumalti that he will not be sending Rajjo away as he wants to punish her for planning and plotting against him.

Both Pushkar and Madumalti try to convince Arjun otherwise but Arjun is adamant.

Arjun tells Chirag that his kindness had been exploited while his family’s reputation has been ruined.

Meanwhile, Urvashi favours Arjun and tells Madumalti that she will be needing a maid to look after her personal needs and that Rajjo will be perfect for the job.

Arjun agrees with Urvashi and tells Rajjo that she will be the personal maid of Urvashi who will do her bidding and serve her every need.

Urvashi goes to inform her parents when Puskar comes to question Urvashi for not forcing Rajjo out of the house.

Meanwhile, Urvashi tells Pushkar that she is doing that to keep Rajjo in her sight so that she can stop her from creating problems.

However, Pushkar tells her that she has committed a foolhardy to underestimate Rajjo who is like a poisoned grass which will spread poison in her body if she rubs her wrong.

In the meantime, Rajjo requests Arjun to let her go and arrange medical treatment for Manorma and then she will return home.

However, Arjun refuses to let her go and reminds her of the money she owes him.

Seeing Rajjo bent on going, he threatens her with consequences if she dares to meet her mother.

Later, Arjun feels sad at becoming an angry, vile person at Rajjo’s behest and resolves to throw Rajjo out of his life.

Meanwhile, Rajjo calls Nangu Kaka to inform him that she will not be able to come there for a few days and asks him to look after Manorma.

Afterwards, Rajjo constricts herself in a ball and cries her out while Chirag looks at her with helplessness.

Later, Sia comes to Chirag and asks her to make everything right for Arjun and comes to Rajjo to comfort her.

Elsewhere, Pushkar comes to meet Manorama who pretends to forget him and tries to go away.

Manorama looks at him like a stranger and tells him that she does not know him at all.

Meanwhile, Pushkar tries to call her bluff but Manorama is prepared for that and fools him and goes away.

Later, Pushkar instructs his people to keep a strict eye on Manorma and give him every minor report.

On the other hand, Urvashi calls Rajjo and asks her to massage her foot and insults her by asking to clean them with her clothes.

However, Rajjo finds a way to annoy Urvashi and harasses her with her antiques.

Arjun comes there and tells Rajjo that she will have to do everything that his bride is to be.

Rajjo feels the sting of Arjun’s behaviour in her heart and goes to massage Urvashi’s legs with her own legs.

Arjun looks away seeing Rajjo serve Urwashi while Rajjo thinks complainingly to Arjun for not being able to see Urvashi’s true colours.

© Copyright tellybest.com, 2022, 2023. All Rights Reserved. Unauthorized use and/or duplication of any material from tellybest.com without written permission is strictly prohibited.
Cached Saved on: Thursday 24th of November 2022 11:54:21 PMCached Disp on: Saturday 10th of December 2022 03:19:21 PM