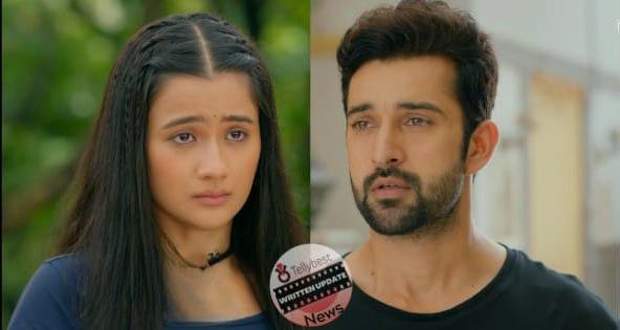 Today's Rajjo 24th September 2022 episode starts with Pratap pacifying Madhu by gifting her a gajra and apologising to her for his harsh words.

In the car, Rajjo asks Vicky about letting her work after marriage but he laughs off at her words and tells her to do household work.

However, Manorama and Rajjo are shocked at Vicky’s Tapori actions of driving fast, bad language and street music.

At the same time, Rajjo gets a call from Khan Babu but she is not able to talk to him because of the loud music.

In the car, Manorama screams at Vicky to drive carefully but he is swirling the car left and right.

In the Thakur mansion, Pushkar and Kavita gift expensive watches to everyone and offer money to Rocky if he needs any help for his business.

Meanwhile, Pushkar is happy after kicking out Rajjo and Manorama from his life.

On the other hand, suddenly a truck comes in front of their car and Vicky swirls the car on the edge of a cliff and the car gets stuck and hangs in the air.

At the same time, Arjun saves everyone and helps them get out of the car and keeps the car from falling off the cliff.

Both Rajjo and Manorama help him save the car while Vicky and Kaka watch them.

Later, Rajjo asks Khan Babu how he found her location but he sees a bottle in Vicky’s pocket.

Not answering Rajjo’s question, Arjun snatches the bottle from Vicky and accuses him of drunk driving.

However, Vicky makes Rajjo smell the bottle and confirms that the liquid in the bottle is cough syrup.

Just then, Arjun offers to take Rajjo and Manorama back and arrange a hotel room for them.

However, furious Manorama accuses Arjun of not leaving them alone and draws a line representing the difference in the social status between Rajjo and Arjun.

Meanwhile, Arjun stutters out that Rajjo and he are just friends but Manorama requests Arjun to not cross the line as they never can live together.

Manorama tells him that society will never accept a relationship between a slave and a master.

Hearing Manorama talking to Arjun so harshly, Rajjo tries to stop her Maai but Manorama declares Rajjo will build her life with Vicky and Arjun will build his own dream life with Urvashi.

© Copyright tellybest.com, 2020, 2021. All Rights Reserved. Unauthorized use and/or duplication of any material from tellybest.com without written permission is strictly prohibited.
Cached Saved on: Sunday 2nd of October 2022 01:54:57 AMCached Disp on: Wednesday 5th of October 2022 06:17:42 PM