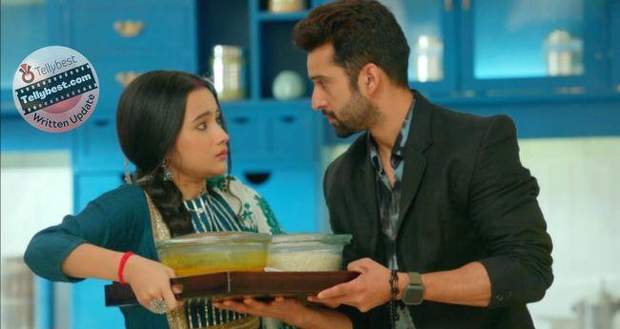 Rajjo's face falls down at Madhumalti's denial while Arjun, Chirag, & Kalindi decide that they can prepare Rajjo themselves since Pushkar's academy isn't the only place to get trained.

Madhu glares at Kalindi for butting in but she stays adamant and makes an excuse of car accidents happening in their lane every day.

Madhumalti announces since Rajjo is the new Bahu of the house, she does not want society to gossip, saying that the new daughter-in-law is struggling to practice in the extreme colds of December.

Rajjo holds Arjun's hand as she feels her dream shatter but Arjun tells Madhumalti that there is an abandoned road near the factory and he will clean it up for his Rajjo.

Rajjo smiles as everyone cheers for her, except Madhumalti.

Meanwhile, Pushkar gets angry once he gets to know that Arjun is helping Rajjo at any cost and orders, Bunty, to go near the factory lane and take pictures of every corner.

On the other hand, Chirag, Swara, Arjun, Rajjo, Kalindi, Sia, and Sagar come to the factory lane to paint the area and make it suitable for Rajjo's practice.

Kalindi teasingly says that men won't be able to do the detailing like them.

However, Chirag jokingly says they are not donkeys to follow them blindly.

When Kalindi experiences interference from her dupatta while painting the running line, Chirag comes there and holds her, helping her to paint.

Meanwhile, Rajjo gets intimidated seeing the painting instructions written in English and Arjun comes there to help her.

Too proud to ask for his help, Rajjo says she will need Kalindi's help only while Arjun ends up calling her a village child (Gaon Ki Baala).

Rajjo thinks he called her Gaon Ki Bala (Village's trouble) and huffs while Arjun informs her that she has worn her dungaree wrong.

He seeks permission whether he can fix it and Rajjo happily obliges.

Tum Jo Aaye Zindagi Mein songs play in the background as Arjun's love for Rajjo gets expressed through his eyes and vice versa.

Later, Rajjo spots Sagar drinking alcohol and screams at him for drinking it out in the open when Chirag is nearby and has turned sober recently.

Everyone hears Rajjo's scream as she says that alcohol shouldn't be another problem when Chirag and Kalindi are experiencing troubles in their marriage already.

Arjun turns to Chirag and asks him what he doesn't know that Rajjo knows but Chirag turns the serious situation into a light one, by dismissing it as a small problem.

Kalindi comes to Rajjo, urging her to think twice before speaking while Chirag makes the painting fun by splashing little paint on everyone else.

Madhumalti and Jhilmil come there and Madhu complains that running is more important to Rajjo and Arjun than making love.

Jhilmil then shows Madhu a love potion at Thakur House, saying that only two drops are enough to make couples go crazy for each other.

Jhilmil mixes it in two glasses of buttermilk which Madhu offers to Rajjo and Arjun once they come back.

However, Arjun denies drinking it, making Madhu do her emotional drama of saying that he just won't accept his mother's love.

Rajjo drinks it up, urging Arjun to do the same while Jhilmil and Madhu look at each other in secrecy.

© Copyright tellybest.com, 2022, 2023. All Rights Reserved. Unauthorized use and/or duplication of any material from tellybest.com without written permission is strictly prohibited.
Cached Saved on: Wednesday 25th of January 2023 01:13:06 PMCached Disp on: Wednesday 1st of February 2023 08:55:03 PM