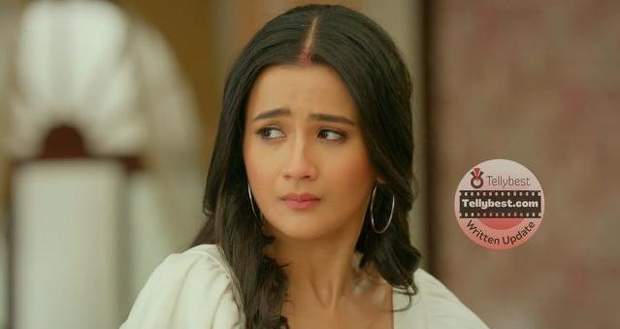 Today's Rajjo 25th January 2023 episode starts with Rajjo saying that Arjun got scared after he was told by Guru maa that Rajjo will die if they stayed together as a husband-wife.

Rajjo says that Arjun considers her as an important part of his life which is why he did everything needed to flip the situation.

In the same way, Madhumalti also did everything she could after she heard about Arjun being in danger.

Rajjo says that mothers can never rest calmly when their children are in any form of danger and Guru maa took advantage of that fact.

Rajjo tells Madhumalti that she does not blame her for whatever she did as her mother’s instinct made her do those things.

Arjun asks Rajjo not to be so kind-hearted that anyone can take advantage of her.

Asking Rajjo to look at Madhumalti who cannot even apologize to her, Arjun asks Rajjo why she is supporting her even after what she did.

Rajjo tells Madhumalti to have some humanity in her heart for the sake of others so that she does not destroy any other lives like she was going to.

Madhumalti curses Rajjo inside her heart but controls her expression so that it does not show on her face.

However, Manorama announces that the household does not deserve Rajjo as they have always done wrong to her daughter.

Manorama asks Rajjo to come with her as she will not live with them anymore.

Seeing Rajjo staring at Arjun, Manorama tells her that no one from that family will stop her anymore now that everything has been revealed.

Rajjo stops in her tracks and comes to Arjun to ask if he will not stop her, talking about their relationship and love.

Rajjo tells Arjun that she has made clear what she feels about him and asks Arjun what is in his heart.

However, Arjun turns his back on Rajjo and leaves upstairs without answering her question.

Manorama asks Rajjo to come with her but Rajjo says that she will not leave until she gets the answers to her questions.

Arjun screams into the pillow and calls Niharika to request her to do what he asked of her with Niharika assuring Arjun that she will do her best.

Rajjo starts beating Arjun with a pillow and asks him why he always runs away from her whenever it is his turn to answer.

Arjun stands silently while Rajjo says that he always breaks her heart by not being clear about his feelings and pushing her away.

As Rajjo asks Arjun why he decided to leave her with tears in her eyes, Arjun hugs her and says that he never believed in Guru maa’s words.

Kneeling to the floor, Arjun asks Rajjo what she would have done if she was in his place.

Rajjo gets stuck while answering while Arjun says that he gave up on the fear of losing her as he cannot bear that.

Arjun says that everything has gotten scattered after whatever his family did to her while Rajjo says that she still believes in him and knows that he will never think wrong of her.

© Copyright tellybest.com, 2022, 2023. All Rights Reserved. Unauthorized use and/or duplication of any material from tellybest.com without written permission is strictly prohibited.
Cached Saved on: Thursday 26th of January 2023 12:00:30 AMCached Disp on: Thursday 9th of February 2023 04:35:26 AM