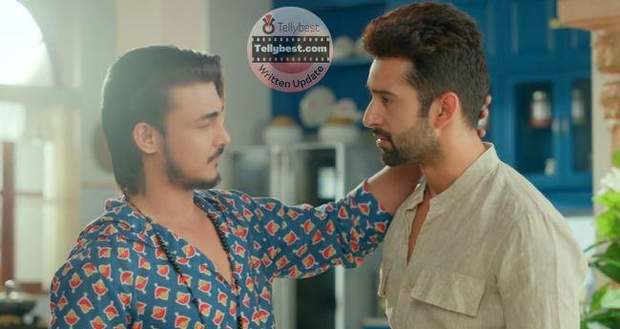 Meanwhile, Rajjo looks suspiciously at Kalindi’s behaviour and thinks about what secret is she hiding.

In the meantime, Kalindi feels jealous of Urvashi and fears that her permanent entry into this house will put her under the permanent pressure of being exposed.

Later, Chirag tells Kalindi that he will tell members of this family what a real blast looks like.

Meanwhile, Guruma calls Madumalti and tells her that Ekadashi will be a perfect day for a wedding.

Later, Rajjo taunts Arjun about making her Urvashi’s maid while Arjun manhandles her.

Rajjo tells her to leave her alone as she is tired of being his fiance’s maid.

However, Arjun tells her that he knows her well enough to know that she is not easily tired and tells her to keep watch on the sleeping Urvashi who might need her at night.

He tells her to sleep outside her room and be available for her at all times and not dare to shrug off her responsibilities.

Rajjo looks at Arjun with derision while Arjun tells her to not stare at him and reminds her of doing the same for him.

Rajjo sits on the floor feeling dejected while Arjun also feels restless at behaving so poorly with Rajjo.

Later, he stops Rajjo from falling on the floor and wakes her up to stay awake.

However, Rajjo wakes up with a start and falls upon him.

Sharing an intimate moment with each other Rajjo gets up and pushes him away.

The next morning, Nangu kaka calls Rajjo and tells her that Manorma has been discharged from the hospital and is nowhere to be found.

Rajjo gets worried and is about to leave when Urvashi blocks her way and tells her that she cannot leave without her permission.

Both the girls are involved in a tussle when Chirag comes there with Manorma.

Rajjo becomes happy to see her mother and rushes to hug her.

In the meantime, Arjun asks Chirag why is he doing this while Chirag tells him that he is not answerable to him.

On being asked by Madumalti and Jhilmil, Chirag tells them that Manorma is not well and will be residing with them because Arjun has prohibited Rajjo from meeting her.

He tells them that Manorma will be here to help out in the wedding preparations.

In the meantime, Pushkar gets angry to hear that Chirag has gotten Manorma discharged from the hospital and taken her home.

Rajjo becomes happy to hear Chirag and tells him that now she will work with double dedication as she has brought her mother to him.

Manorma thanks Chirag for bringing her here and feels relieved from being free of Pushkar’s interference.

She also resolves to protect Rajjo and will be able to take her away from here.

As Rajjo takes Manorma to her room, Arjun feels ignored and throws the glass vase on the floor with force.