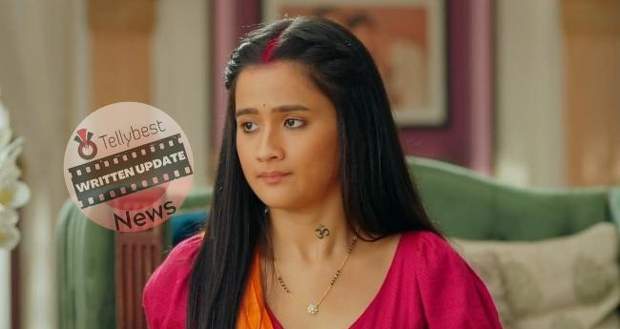 Today's Rajjo 25th October 2022 episode starts with Rajjo telling Urvashi that she will make sure that Arjun doesn't break her fast and give her Shagun.

Just then, Arjun comes there and scolds Rajjo while apologizing to Urvashi.

Later, Kalindi comes to Rajjo and gushes to her about winning a lot of money.

Further, Kalindi gives her money and tells her to keep it as Bakshish.

Meanwhile, Arjun sees the money in her hand and gets angry thinking that Rajjo only cares about money.

Rajjo gives the money back to Kalindi and tells her that she would not take anything from the Thakur house that is not hers.

Later, Kalindi is on her way to the room while Rocky scoops her in his arms and tries to romance her.

However, she refuses and pushes Rocky away while warning him that the family members will kill them if they are caught.

Afterward, Kalindi goes to the hall and greets Pushkar who tells them that his wife has gone to his maternal house for some important work.

The Thakur family convinces him to stay for the night while Rajjo brings water for him.

Pushkar makes a show of showing his shoe while Rajjo sees it and gets confused.

Recalling the shoes at the hospital, Rajjo thinks that they might be someone else's as Pushkar is already wearing his shoes.

On the other hand, Madhu shows Urvashi the golden Kalash that she will get to use during the Karvachauth and will get the keep afterward.

Urvashi's eyes go wide as she keeps looking at the Kalash and gets greedy.

Later, Rajjo gets shocked to see Arjun in the storeroom while he threatens her and demands questions from her.

However, Rajjo starts laughing and pushes away the hand he used to touch her chin and tells him that he is very wrong.

Rajjo questions Arjun and asks him why his eyes always linger on her and he looks at her when she doesn't even do anything.

Elsewhere, Pushkar gets the poll half cut and nails put into it so that it hits and hurts Rajjo.

Further, Pushkar goes to Rajjo and orders her to find his watch that has fallen to make the poll fall on her.

© Copyright tellybest.com, 2022, 2023. All Rights Reserved. Unauthorized use and/or duplication of any material from tellybest.com without written permission is strictly prohibited.
Cached Saved on: Monday 21st of November 2022 09:26:36 AMCached Disp on: Tuesday 29th of November 2022 10:23:29 AM