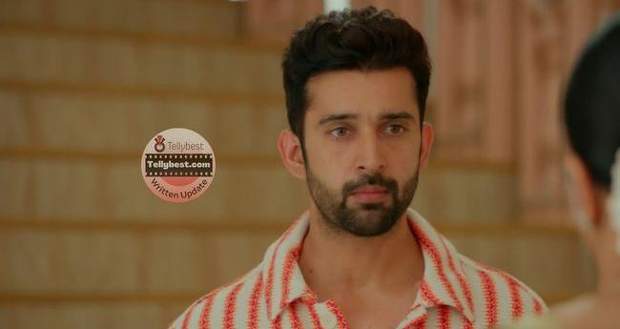 Today's Rajjo 26th December 2022 episode starts with Madhumalti making Arjun and Rajjo drink that drugged milk and sending them to their rooms so that they can take a shower and change their clothes.

After Arjun comes out of the washroom, his eyes fall on Rajjo who stares at him with innocent eyes.

Both Rajjo and Arjun feel dazed and breathe heavily as their heartbeat gets accelerated with each passing second.

Rajjo stares intensely at Arjun and tells him that she is feeling weird as if something is making her restless.

Arjun replies that he is also feeling discomfort as his head seems to be dizzy but in an unusual manner.

Rajjo comes closer to Arjun and whispers in his ear that it is her first time feeling like that which excites Arjun instantly.

Arjun says that he is also going through something like that for the first time and is seeing another side of Rajjo.

Rajjo rubs her hand softly on Arjun’s face while he feels her touch by closing his eyes.

With blushed cheeks and trembling lips, Rajjo says that it is her first time giving a kissy and she likes the feeling quite a bit.

Arjun gets happy inside on hearing Rajjo and says that he had no idea that Rajjo would like such a thing.

Arjun declares that he will be one to take the first step and stares at Rajjo’s lips with luscious eyes.

Reducing each centimeter between him and Rajjo, Arjun moves closer toward Rajjo’s lips with his eyes locked on her.

However, as Arjun is about to initiate the kiss, Rajjo says that she has already received a kiss from Sia for motivation.

Arjun’s expression changes and he moves away from Rajjo as he realizes that Rajjo is feeling that way because of nervousness.

Rajjo tells Arjun how much the next day matters in her life while Arjun sulks and says that she should have said things clearly from the start.

Arjun says that his mood is ruined but his words remain unfinished as Rajjo rests her head on his shoulder.

To stop Rajjo from continuously bursting balloons, Arjun holds her tightly with her body resting on top of him.

Meanwhile, Pushkar talks to his son Bunty and commands him to fix two lights at the finish line of the race.

Arjun stares at Rajjo with restless eyes as she takes off her earrings and dupatta before sleeping on the bed.

Making Rajjo lie on the bed and put on a blanket over her, Arjun asks her to sleep as she has a race the next day.

The next morning, Madhumalti and Jhilmil come to check on Arjun and Rajjo and get shocked to see Arjun sleeping outside the room.

On the other hand, a girl in sportswear is seen making a cool entry and going to someone to talk.

Arjun removes all the decorations before Rajjo wakes up and acts oblivious to everything that happened the earlier night.

Rajjo trips on her steps and lands directly in Arjun’s hands with their eyes fixed on each other.