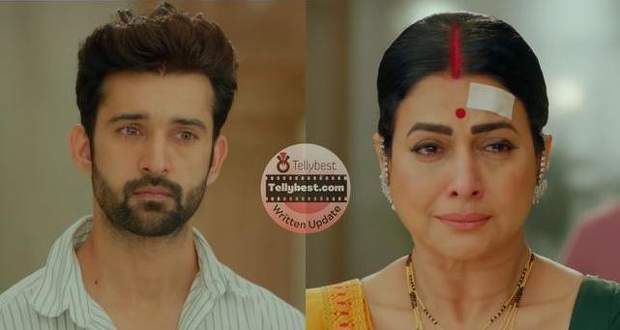 Today's Rajjo 26th January 2023 episode starts with Arjun telling Rajjo that when someone loves someone very much they do everything to keep them safe.

Arjun is about to leave the room when Rajjo puts her hands on Arjun’s cheeks and tells him if he went away she would have died anyway.

She even urges Arjun to tell her clearly what he means when Arjun asks her if she will make him say the words.

Rajjo teases Arjun by saying that after today it is clear that she is braver than Arjun, making Arjun look at her with anger.

When Rajjo is about to move away, Arjun grabs her arm and turns her around in his embrace causing Rajjo’s top to rip off in one place.

Back in the room, Rajjo puts the curtains around herself due to the torn top and asks Arjun why he keeps bringing her close whenever he wants.

When Arjun mentions that he is Rajjo’s husband, Rajjo says that if he thinks he has gotten a license just like the drivers.

Rajjo also announces that every husband says this only and thinks their wives are stupid but Arjun shuts her up by saying that his wife is cute.

Getting close to Rajjo, Arjun asks her if she really wants to give chance to their relationship after what happened between her and his family.

Arjun even tells Rajjo that he cannot choose between his family and her but Rajjo urges him to reveal with whom he was talking on the call.

He says that out of all these things, this is what she needs to know with a hint of irritation in his voice and answers that it was an employee.

He even asks Rajjo out on a date which Rajjo mistakes it as a Court date and asks him if they need to go to court.

Arjun makes her understand this they will get to know each other.

Putting the hair behind Rajjo’s ear, Arjun tells Rajjo that they need to spend some time with each other and Rajjo announces that she herself does not want them to fight always.

After Arjun walks away, Rajjo feels upset when she finds Niharika’s name on Arjun’s call list and decides to ask Arjun about it.

Later, Rajjo and Arjun announce in front of the family that they have decided to give their relationship one more chance which makes Madhumalti’s face fall.

While Rajjo hugs Manorama to calm her down, Arjun promises Manorama that he was doing everything to keep Rajjo safe.

Kalindi then also hugs Rajjo saying that now Rajjo is theirs and Arjun mentions that he wants Manorama to stay here with them.

Looking at Madhumalti sternly, Arjun states that he will not tolerate anyone mistreating Rajjo from now on and he walks away.

Rajjo yells that Khadbabu cannot forget about her demand and Arjun tells Madhumalti that he is forgiving her after turning again.

While Arjun mentions that from today their relationship will also have a fresh start, Madhumalti hugs him but Arjun does not put his hands around her.

Pratap and Chirag both praise Rajjo for not tearing the relationship of mother and son and Madhumalti embraces Rajjo in a hug for this and announces that she will become her mother in a sugar-dripping voice.

Later, Madhumalti and Pushkar plan to not let Rajjo get close to Arjun again.

© Copyright tellybest.com, 2022, 2023. All Rights Reserved. Unauthorized use and/or duplication of any material from tellybest.com without written permission is strictly prohibited.
Cached Saved on: Friday 27th of January 2023 12:02:08 AMCached Disp on: Thursday 2nd of February 2023 07:54:19 PM