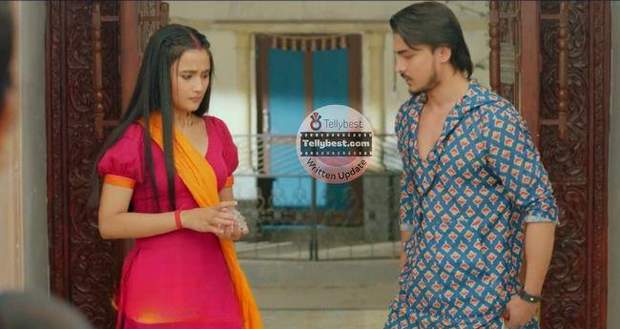 Today's Rajjo 26th November 2022 episode starts with Rajjo telling Manorma to wait while she cleans up the mess.

Meanwhile, Rajjo thanks Chirag for bringing her mother home because she had been too worried for her.

Chirag tells her that he is helping her because he believes she is right and does not trust Urvashi.

He also asks Rajjo to expose Urvashi and save Arjun from committing to a lifetime of mistakes as he is angry right now and cannot see right and wrong.

He sympathises with her for getting hurt by Arjun but he wants her to save her relationship with Arjun by keeping him from marrying Urvashi.

However, Rajjo tells him that she has no desire to get back with Arjun after he has broken her heart and all she feels for him now is pity as he cannot see Urvashi’s deceit and believes everything she tells him.

She also tells Chirag that now her only goal is to prove her innocence and expose Urvashi.

She tells him that it will not affect her if Arjun marries another while Chirag tells her that he does not believe her and asks her to swear on Arjun.

Rajjo complains to him about Arjun for hurting her despite her care and concern for him.

Chirag smiles at her innocence and tells her that this is what feelings are all about and there is no control over them.

Elsewhere, Pushkar scolds Urvashi for not telling him about Manorma coming there.

Meanwhile, Urvashi tells him that it was not her place to question Chirag and asks him to come home and deal with the matter himself.

Pushkar becomes angry and tells her to keep Rajjo and Manorma apart else she will tell everything to Rajjo and then they will get in huge trouble.

Urvashi being smart asks him what Manorma knows that has him so scared.

However, Pushkar tells her to not waste her time on nonsense and do as asked or else she will regret it a lot.

Later, Manorma decides to tell Rajjo everything so that she does not worry about her illness.

Meanwhile, Madhumalti and Urvashi are weary to have Manorma and Rajjo in the house.

Urvashi tells Madhumalti to install Manorma in the room next to her so that she can keep an eye on her so that they cannot plan and plot against her.

Meanwhile, Rajjo objects to Urvashi’s decision but Arjun comes along and tells her that she will have to abide by whatever Urvashi tells her as she is her slave.

Later, Arjun comes to Chirag and complains to him for batting in Rajjo’s team and trying to out him.

Chirag explains to him that very soon he will realise that Rajjo is in his team only and that team is made by God and no one can break them apart.

And one day he will come to him to tell him that he was right and they all will cheer on it.

Arjun recalls all the moments that made him feel closer to Rajjo and feels sad.

Meanwhile, Rajjo is expressing her love for Manorma and tries to remind her of her past.

Manorma watches Urwashi stand guard on them and acts ignorant.

Rajjo tells her that she will have to struggle some more to remember her as she is tired of being alone and wants her mother back.

© Copyright tellybest.com, 2022, 2023. All Rights Reserved. Unauthorized use and/or duplication of any material from tellybest.com without written permission is strictly prohibited.
Cached Saved on: Saturday 26th of November 2022 11:41:41 PMCached Disp on: Thursday 1st of December 2022 01:09:52 PM