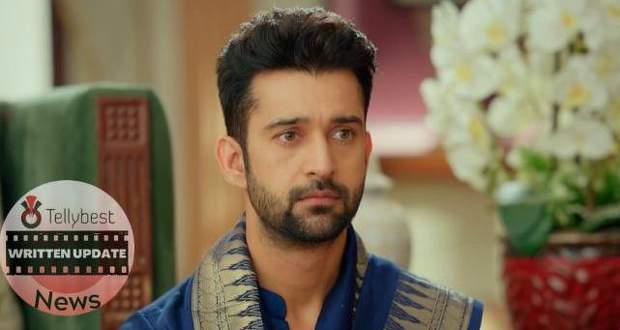 However, Sia tells him that he should be a good boy and do his own work himself as she drags Rajjo towards the kitchen.

Rajjo laughs as she makes the strawberry milkshake for Sia and gives it to her while Sia gives half of it to her to drink.

However, Rajjo gets emotional seeing it and tells Sia that she cannot drink it as she is fasting.

Sia gets happy hearing that and asks Rajjo if she can address her as 'Aunt' when no one is around.

Rajjo gets stunned and is unable to give her an answer while Swara comes there and tells Sia to finish her drink first.

Rajjo leaves from there while Swara asks Sia if Rajjo had eaten anything for the whole day.

Elsewhere, Rocky drags Kalindi and tries to force feed her by telling her that no one is looking.

However, Kalindi keeps arguing with him and drags her hands away from him saying that she is not going to cheat.

Rocky angrily taunts her saying that she can cheat on her husband but cannot clear on a fast.

Just then, they both get shocked to see Chirag who tells her that she gave him a good gift for Diwali.

Further, Chirag acts oblivious to their affair and gives money to Rocky to go out with Sagar and eat at a hotel.

Chirag looks away from Kalindi and tells her that he wonders when and where their relationship went wrong.

He talks about how he had only one drink the night of the accident and that even though the accident was not his fault, he was the one blamed for everything.

Kalindi looks ashamed as Chirag tells her that what hurt him the most was that she didn't stop others from blaming him.

Kalindi tries to justify herself by saying that she was shocked at that time and didn't even know anyone.

However, Chirag looks at her with longing and tells her that she knew him enough to know that he would have never risked the lives of his younger brother and then pregnant wife.

Chirag further looks into Kalindi's eyes and tells her that he is glad they can look into each other's eyes for the sake of the Karva Chauth.

At the same time, Rajjo overhears Arjun talking badly about her and saying that he's keeping a fast for Urvashi who is suffering because of that girl.

Rajjo feels hurt while listening to their conversation from the net window.

Afterwards, the Thakur family starts the Karvachauth rituals and put the dupatta on their wives while Rajjo calms herself saying that her fast will be broken the same way.

While the family gets busy in the pooja, Rajjo goes to the basement and starts colouring the white cloth that Arjun had thrown on her.

However, while she's getting ready, Arjun comes there and the Pallu of the red saree falls on him which makes both of them flustered.