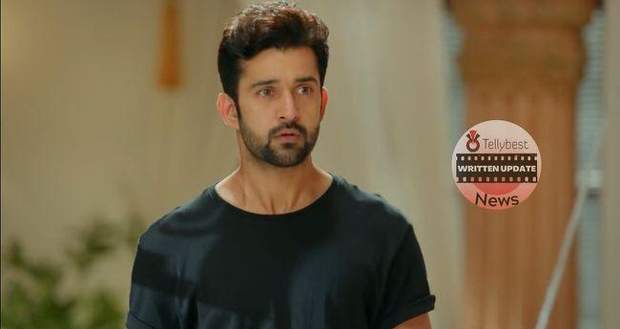 Today's Rajjo 26th September 2022 episode starts with Rajjo and Arjun parting ways to their worlds with their minds full of their moments spent with each other while the song “Humsafar” plays in the background.

At the same time, a police officer notices Vicky in the car and looks at him suspiciously.

In Kalindi’s room, Kalindi is cursing Madhu for insulting Kavita while her mother tries to calm her down.

Just then, Kalindi calls her relationship with Chirag void of love and cries at her situation.

However, Kavita advises Kalindi to have a second child with Chirag but she exclaims she doesn't love Chirag.

Shocked by Kalindi's words, Kavita tells Kalindi about a married woman's sacrifices and advises her to decide what she wants to do clearly.

On the other hand, Vicky stops the car at a deserted house and both Rajjo and Manorama see the house with distaste.

Vicky informs Rajjo that the house is his Adda (place) where he chills with his friends.

In Thakur's house, preparations for Arjun’s and Urvashi’s Tilak ceremony are going in full swing when Madhu finds Arjun missing.

At the same time, Arjun enters the house and Madhu confronts him for going to Rajjo again.

On the other hand, Rajjo accuses Vicky of fooling everyone as he doesn't know the blueprint of the house.

Changing the conversation, Vicky advises Manorama that he and Rajjo can get married in this house but Rajjo refuse as she is in no rush to get married.

However, Manorama recalls Pushkar’s threat and agrees with Vicky’s advice and Rajjo glares at her mother for rushing her marriage.

On the other hand, Arjun pacifies Madhu by telling her about Rajjo’s accident and assures her that he is not going anywhere.

At the same time, Madhu finds Arjun bleeding from his arm and gets shocked.

On the premise of the city, Rajjo gets ready reluctantly while Manorama puts on jewellery for her daughter lovingly.

Meanwhile, Rajjo tells Manorama about her and Khan Babu’s moments and talks about her misconception of all men torturing their wives after marriage.

Rajjo tells Manorama that Khan Babu is different from all men.

© Copyright tellybest.com, 2020, 2021. All Rights Reserved. Unauthorized use and/or duplication of any material from tellybest.com without written permission is strictly prohibited.
Cached Saved on: Sunday 2nd of October 2022 07:23:28 AMCached Disp on: Thursday 6th of October 2022 04:45:51 PM