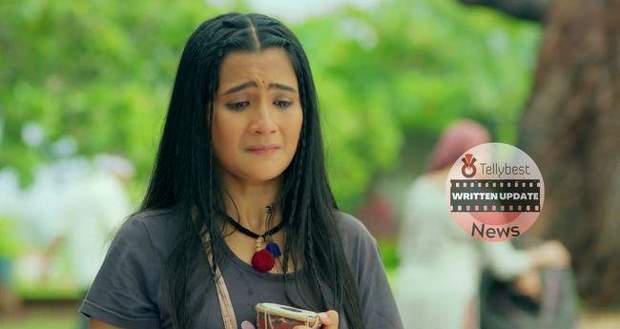 Today's Rajjo 27th August 2022 episode starts with Rajjo using the darkness to her advantage and rushing to hide under the bed before she can get spotted by Arjun.

Arjun starts looking around due to the bad smell and thinks that only their house's fuse has gone off.

Just then, Urvashi (Arjun's fiancee) comes there with a candle to light the room and tells Arjun that she did it purposefully.

Urvashi flirts with Arjun and tells him to praise her under the moonlight while putting her hands around his neck.

Meanwhile downstairs, the Thakur family gets upset at the fuse going off, especially Madhu which irritates Chirag.

Back in Arjun's room, Urvashi makes him tie the strings to her blouse while Rajjo closes her eyes feeling flustered.

Urvashi tells Arjun to not risk his life again reminding her how possessive she is of him.

Rajjo takes this chance to get her Damru while Urvashi goes back downstairs.

Arjun gets ready and keeps smelling that dirty smell which instantly reminds them of Rajjo.

Elsewhere, Manorama is running through the forest shouting Rajjo's name when the men from the Aashram come there and try to take advantage of her.

Manorama gets flashbacks of Pushkar betraying her and starts beating the man saying that she doesn't need anyone's help.

Back in Lucknow, Pushkar and his family arrive at Arjun's house to greet the Thakur family as they talk about the fuse going off.

Urvashi accepts her mistake and says that she is the one who had removed the fuse but broke when trying to put it back in its place.

Madhu comes there with Diya and tells the family that they will light the house with diyas.

Jhilmil tries to joke but gets insulted by Pushkar as he tells Madhu that what she has thought for her son must be the best option.

Elsewhere, Manorama learns that Rajjo has gone to Lucknow and prays to God that Rajjo and Pushkar don't cross paths.

Later, Rajjo sees the family celebrating downstairs while Arjun is walking toward her distracted by the phone.

Rajjo sees him and hides while Arjun goes from there without noticing her.

On the other hand, Madhu tells Urvashi to not do this kind of thing without her permission as she doesn't like anyone hindering her plans.

Rajjo notices the bond between Madhu and Arjun and gets emotional about missing Manorama.