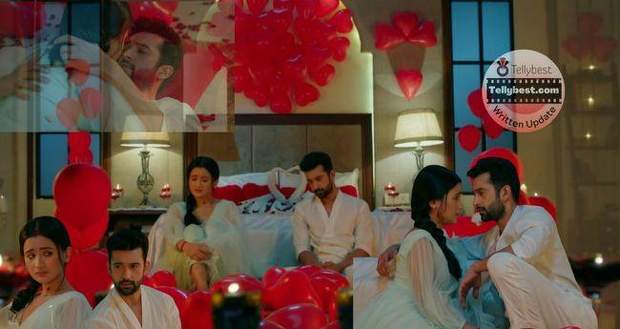 Today's Rajjo 27th December 2022 episode starts with Arjun asking Rajjo to brush her teeth while he quickly removes the crease from the bedsheet.

Arjun goes inside the bathroom to brush with Rajjo who asks herself why doesn't she remember anything from last night.

After the brushing is done, Rajjo sits on the bathroom slab and looks visibly tensed.

Arjun sits beside her as she reveals that she is scared of losing the race since this is the only option she can better Manorama's life.

Arjun comforts her and says that worrying is a good sign since it shows how valuable racing is for Rajjo.

He then narrates the story of how he lost one kidney when he was on a bike with Chirag but they both got into an accident.

Arjun says that Chirag's surgery made him feel he should die as well but Chirag gave him the spirit to go to the US.

Arjun then expresses his gratitude to Rajjo who has made Chirag sober again and jokes that if Rajjo doesn't shower, all the participants will go away from her anyways.

Meanwhile, Pushkar in his mind thinks that what this Akal Mrityu thing Madhumalti believes in.

Madhumalti asks Pushkar to make a promise to her that Rajjo shouldn't win and he promises it since a seventh number player is coming who will crash into Rajjo's life as Sade Sati (bad astrological combination).

At the race line, Rajjo stands stressed but Kalindi, Sia, Arjun, and Chirag wish her well.

Chirag then turns to Arjun who looks stressed as well.

Arjun tells Chirag that he is afraid that Rajjo might forget him in the limelight of the medals, and glory, but affirms that since Rajjo wants to take this flight alone by spreading her wings out, he is ok to stand behind her as a rock.

Manorama comforts Rajjo, telling her that failure is nothing, and everything is learning.

She reveals that she used to feel nervous just like Rajjo but it is normal.

She further asks Rajjo not to overthink and just give her all in the race.

The other participants talk about a 7-number player, saying she will beat them all today, making Rajjo curious.

A girl named Niharika stands beside Rajjo as she is a 7 number player and has a warm interaction with Rajjo.

Later, Rajjo learns that Niharika is Pushkar's daughter who has been a state and national level champion through Arjun.

Rajjo notices how warmly Arjun and Niharika interact when Arjun steals her hair tie just before the race while Madhumalti asks Pushkar if this was the Sade Sati he was talking about.