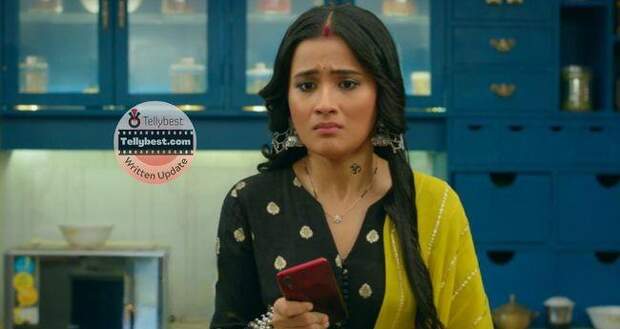 Today's Rajjo 27th January 2023 episode starts with Arjun lighting the candles to complete the romantic decoration while Chirag comes to tease him.

Kalindi tells Chirag to not tease him after all, Arjun already has already delayed taking Rajjo on a first date.

Arjun blushes at Kalindi’s comment and asks her whose side she is at.

Meanwhile, Pushkar tells Madhumalti that both Manorama and Rajjo are poisonous while Madhumalti tells him that they will have to kill her before she takes Arjun on her side.

Pushkar mocks her saying she is too late now as Arjun has devoted himself to Rajjo.

He also tells her angrily that Rajjo has turned his daughter against him and Arjun dares to ask him to apologize to Rajjo.

Madhu is also angry at Rajjo for turning Arjun against her who is still not talking to her despite her apology to Rajjo.

Pushkar tells her to go and throw Rajjo and his mother out of the house.

However, Madhumalti tells him that Arjun has taken the responsibility for his mother-in-law.

Pushkar tells Madhumalti that they cannot afford to leave things be.

He tells her that if anything happens to Manorama, then Rajjo will be devastated and will leave the house and  Arjun will not beagle to do anything.

Meanwhile, Rajjo comes to Manorama excitedly, asking her to choose a dress for her date.

Manorama becomes happy to see Rajjo happy and blesses her to be always happy.

Seeing Manorama working in the kitchen, Rajjo insists on doing the work but Manorama sends her away.

Nangu Kaka tells Manorama to come to him fast as he needs her help.

Madhumalti is about to remove the phone when Jhilmil’s voice scares her and she throws the phone in the dustbin but it falls outside it.

Later, Arjun is waiting for Rajjo and checks something out of sight when Rajjo arrives there.

In the meantime, Rajjo feels happy to see Arjun’s effort he has taken for her and wants to make sure she is looking nice for Arjun.

Rajjo decides to consult her mother and goes back as Arjun is not there.

Rajjo is gone before Arjun can stop her.

Meanwhile, Manorama arrives at Kaka’s location and wonders what he is doing alone in a deserted place.

Meanwhile, the lake is filled with crocodiles near which Nangu Kaka has called her.

Just then, Kaka spots her and tells her to run but two goons accost her.

In the meantime, Rajjo searches for Manorama in the whole house.

Rajjo looks at the scattered kitchen and half-cooked food and wonders where Manorama can be.

On finding Manorma’s phone near the dustbin, Rajjo’s instinct begins to warn her.

Meanwhile, Pushkar comes to Manorama with his evil smile and ties her hand.

Manorama tells him to leave as she is not afraid of him and will fight back at every turn.

Pushkar laughs wickedly and tells Manorama that he plans to leave her at a place of no return and then Rajjo’s time will come too.

Meanwhile, Arjun finds Rajjo in the kitchen worrying about Manorma.

Arjun tells her that Manorama is not a child and must have stepped out for some work.

Rajjo tells him that her mother never leaves without telling her and that too when she is preparing food for their date.

However, Rajjo is not convinced and tells Arjun that she can feel in her heart that her mother is in some trouble.

© Copyright tellybest.com, 2022, 2023. All Rights Reserved. Unauthorized use and/or duplication of any material from tellybest.com without written permission is strictly prohibited.
Cached Saved on: Saturday 28th of January 2023 12:03:11 AMCached Disp on: Wednesday 1st of February 2023 08:57:53 PM