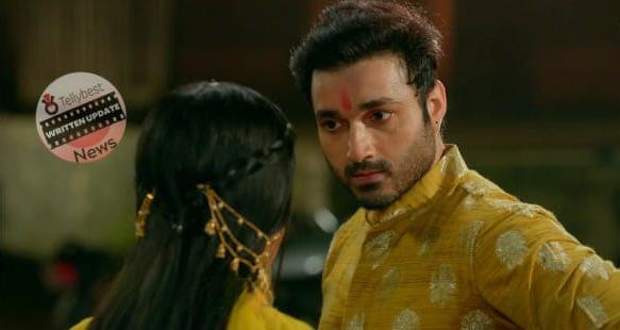 Today's Rajjo 27th September 2022 episode starts with Arjun getting stitches on his injury from a doctor in the hospital.

Meanwhile, Arjun recalls Rajjo getting stitches from her injury and recalls her fearlessness.

Getting out of his flashback, Arjun reminds himself to forget Rajjo and only think about Urvashi.

On the other hand, Manorama and Rajjo are joined by a lady and a girl from Neeltaal.

Later, the girl clicks Rajjo’s picture and sends the picture to Arjun accidentally.

At the same time, Arjun's heart skips a beat when he sees a picture of Rajjo looking beautiful like an angel in a yellow Saree and her pink flushed cheeks accentuating her glow of innocence.

Outside the hospital room, Madhu appreciates Chirag for taking up his elder brother's responsibilities and the doctor informs them to take Arjun home.

After Madhu and Chirag enter the hospital room, the doctor recognises Pushkar.

He confronts him for destroying Manorama’s career 18 years ago by fooling her to have an abortion.

The doctor insults Pushkar for getting an unmarried girl pregnant and leaving her alone to raise the child.

Meanwhile, the doctor's loud voice gathers the crowd and Pushkar gets scared seeing Arjun and Kavita coming toward him.

However, the doctor goes and Arjun asks Pushkar about the situation but Pushkar changes the subject.

On the other hand, Vicky is drinking whiskey and compares Rajjo to Maha Laxmi of his life.

Vicky dreams of earning money from Pushkar and his friends by selling Rajjo's body to them.

At the police station, the policeman identifies Vicky as a human trafficker and orders his subordinate to find the owner of the white car as he wasn’t able to click a picture of Vicky’s car number plate.

On the other hand, Arjun deletes Rajjo’s pictures and decides to focus on Urvashi only.

Meeting Urvashi, he compliments her and apologises for hurting her immensely and urges her to restart their relationship.

Arjun clicks a selfie with Urvashi while Rajjo in the Thakur mansion and Vicky click a selfie together in the cottage and everyone showers flowers on both couples.

Later on, Arjun is learning to dance and Madhu gets happy seeing Arjun happy after a long time.

On the other hand, Rajjo hears a car honk and dashes outside happily and sees Arjun standing on her threshold.

However, her hallucination breaks and sees a stranger asking for directions.

At the same time, Arjun imagines Rajjo eating a cupcake but Siya is eating the cupcake.

Both Arjun and Rajjo are lost in each other's thoughts but deny the reality.

© Copyright tellybest.com, 2022, 2023. All Rights Reserved. Unauthorized use and/or duplication of any material from tellybest.com without written permission is strictly prohibited.
Cached Saved on: Monday 21st of November 2022 07:52:57 PMCached Disp on: Wednesday 7th of December 2022 04:15:02 PM