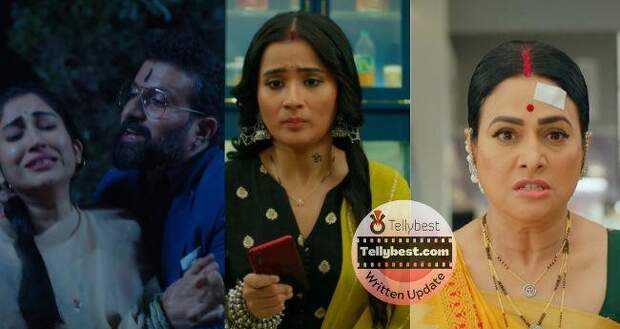 Today's Rajjo 28th January 2023 episode starts with Pushkar telling Manorama that he has created an atmosphere in the home that would make everyone think that Manorama has run away.

While Manorama struggles to get out of Pushkar’s grip, Pushkar informs her that by the time everyone realizes Manorama is gone, the crocodiles will have eaten her completely.

Earlier that day, after learning that Manorama has gone to crocodile lake, Rajjo informs Arjun that they must go there if they want to save Manorama.

Rajjo and Arjun are walking in a hurry in the hall when they find Madhumalti standing in front of them and Arjun lets go of Rajjo’s hand quickly.

When Rajjo asks Madhumalti if she knows about Manorama, Madhumalti lies not knowing anything and Rajjo and Arjun walk away.

Madhumalti hopes Pushkar helps her to get rid of Rajjo quickly with a sneering smile on her face.

On the other hand, Pushkar tells Manorama that the crocodiles are eagerly waiting for her.

Forcing Manorama to look down, Pushkar yells that today Rajjo’s life is getting a new beginning whereas Manorama’s life is coming to an end as she struggles to get free.

After telling Manorama that he will send Rajjo to her very soon, Pushkar orders his goons to throw Manorama into the water.

At the same time, Arjun pulls his car just a few feet away from the lake, and Rajjo runs out of the car to search for Manorama.

Grabbing her from behind, Arjun orders her to stay back as there are many crocodiles in the lake but Rajjo starts arguing with him.

Rajjo pleads with Arjun to let her go whereas Pushkar and his goon throw Manorama into the lake.

Hearing the splash sound, Rajjo turns towards the lake and behaves hysterically as her instinct tells her that Manorama is in the lake.

Meanwhile, noticing Rajjo and Arjun, Pushkar hides behind some rocks and mumbles that before Rajjo and her bodyguard see him, he needs to run away.

On the other hand, Rajjo lets out her sorrow by yelling that she does not have anyone except Manorama whereas Arjun has the whole family with him.

Feeling the anger rising, Arjun screams that Manorama is also his mother and he is here to save her only.

Afterward, Rajjo is about to jump inside the lake but Arjun holds her back while the crocodiles come near the edge of the lake.

In the meantime, in Thakur mansion, Swara informs Kalindi and Chirag that Rajjo and Arjun have gone to search for Manorama near the crocodile lake.

On the other hand, when Rajjo calls Nangu Kaka for Manorama’s information, Nangu Kaka lies that Manorama has gone village to take care of a family as Pushkar has kept a gun near Nangu’s kaka's head.

Recalling how she found Manorama’s phone there, Rajjo informs Nangu Kaka that Manorama can never do this but Nangu Kaka sticks to his lie.

Meanwhile, Rajjo notices Manorama’s dupatta which makes Arjun realize that Manorama is indeed under the water.

Afterward, some police officers arrive there to bring out Manorama’s body and Arjun takes a hysterical Rajjo home to calm her.

On the other hand, Siya overhears Madhumalti talking to Pushkar about the lake but Madhumalti orders her to keep her mouth shut.

Afterward, Chirag and Arjun are busy calming Rajjo down whereas Madhumalti orders Pushkar to get rid of the remaining proofs.

© Copyright tellybest.com, 2022, 2023. All Rights Reserved. Unauthorized use and/or duplication of any material from tellybest.com without written permission is strictly prohibited.
Cached Saved on: Sunday 29th of January 2023 12:12:08 AMCached Disp on: Thursday 9th of February 2023 04:33:53 AM