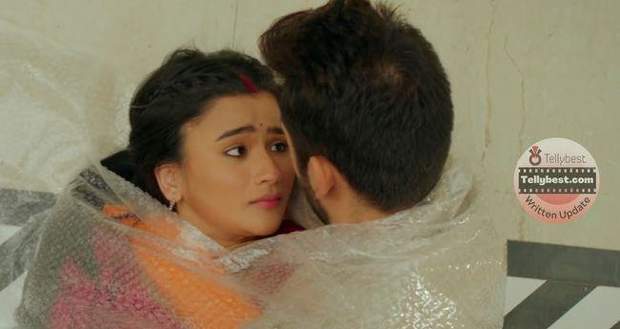 Today's Rajjo 28th November 2022 episode starts with Pushkar stopping Manorma in her tracks and accusing her of playing innocent for the benefit of the family.

Meanwhile, Manorma denies knowing her and tells him that he has told the same at the Pratichaya centre.

Later, Pushkar makes Manorma drop the tea in frustration and threatens to harm Rajjo if she opens her mouth.

Hearing the noise, Madumalti and Jhilmi come running while Rajjo comes to Manorma for picking up the broken pieces.

Madhumalti expresses her anger at both mother-daughter creating problems in their life.

After a while, Pushkar tells Madumalti that he has decided to take her up on her offer and has come to live here until Arjun’s marriage.

In the meantime, Manorma is upset at Pushkar for keeping tabs on her and decides to show Arjun Urvashi’s papers to prove Rajjo’s innocence.

However, she gets disappointed to see that her papers are ruined due to tea.

Later, Arjun is selecting his dress for Tilak while Rajjo comes to his room and stops seeing his well-toned body on display.

Arjun sees her in his room and walks towards her while Rajjo’s heart misses a beat.

Arjun asks her for not being with Urvashi and buzzing around him like a bee.

Hearing Arjun, Rajjo begins to buzz around him telling him this is how the bee buzzes.

Meanwhile, Manorma is waiting for Rajjo while Pushkar is coming her way.

Just then Chirag comes to Pushkar to give him mouth freshener when Pushkar asks him to not go against his family.

However, Chirag tells him that he is not under the influence of alcohol and is thinking straight.

Elsewhere, Arjun lifts Rajjo in the air and asks her what is she doing in her room while Rajjo admires his body.

Arjun also tells her to always knock before coming to his room as he will be married soon.

Later, Arjun sees Rajjo wearing a holy necklace and asks him why is she wearing it still.

Meanwhile, Madhumalti comes to Pushkar and tells him about Chirag becoming Rajjo’s supporter and asks him to take matters into his hands as her children are out of their hands.

Pushkar tells her that she is right to be concerned about mother and daughter as he feels the same.

Madhumalti asks him to do something to get Arjun and Chirag against them.

Pushkar becomes happy about getting permission to openly fight Manorma and Rajjo.

She tells him that it is the significance of entrapment for him just like he has entrapped her in his promise to keep her there.

She also tells him that she will continue to wear them until she proves to him that she has been right all along and after that, she will snatch these things away from her body and life.

Later, Rajjo comes to Manorma’s room and slides down beside her telling her that she wants to spend every minute with her but she is been keeping busy in this house.

She tells Manorma that Arjun is getting into a mess after marrying Urvashi and he does not want to see it.

Rajjo expresses her concern for Arjun who is going to his doom.

© Copyright tellybest.com, 2022, 2023. All Rights Reserved. Unauthorized use and/or duplication of any material from tellybest.com without written permission is strictly prohibited.
Cached Saved on: Wednesday 25th of January 2023 11:10:31 AMCached Disp on: Thursday 2nd of February 2023 09:01:57 PM