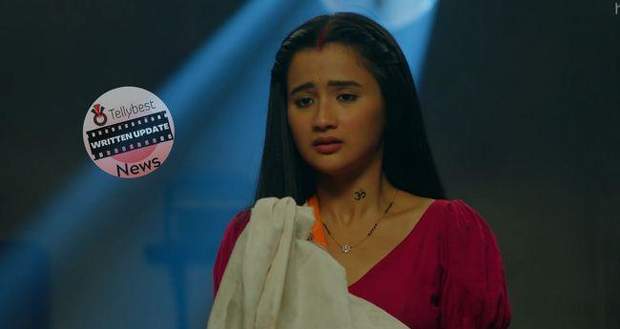 However, Urvashi talks back to them and says that if they are exposed, the Thakur family will kick her out and put them in jail.

Further, as Urvashi is leaving the room, she bumps into Pushkar who tells her to bring Rajjo to the terrace.

Elsewhere, Rajjo is bringing the punching bag to Arjun's room while he's shirtless and starts arguing with her.

Rajjo hides her face as she tells Arjun that she wasn't even looking at him and is there to do her work.

As Rajjo is putting the punching bag inside, Arjun drags her to the wall and cages her between his arms.

Rajjo's breath halts as she asks him what he's trying to do.

However, Arjun takes a glass of water and tries to force her to drink the water but she pushes it away.

Arjun tells her that he knows she has kept a fast and tells her to drink the water.

Rajjo rebels against him and asks him what he will do if she does not drink the water.

Elsewhere, Jhilmil and Mukund corner Swara and try to convince her to fight for being the best daughter-in-law which makes Swara a little hesitant.

However, just as they leave, Jhilmil's husband comes there and calmly tells Swara that she should ignore their words and keep doing what she likes to do.

Back in Arjun's room, Arjun insults Rajjo for the saree incident while she says that she loses to him knowing he will never understand her.

Further, as Rajjo gets out of his grip and goes to put the punching bag in place, she starts getting dizzy.

Arjun fears that she might get injured and saves her while she thanks him.

However, Rajjo slips and makes both herself and Arjun fall into the cupboard which locks itself from the outside.

Rajjo starts laughing but stops in panic as Arjun informs her that they will go out only if someone frees them.

Urvashi comes looking for Arjun in the room just then and Rajjo shouts despite Arjun covering her mouth.

Urvashi opens the cupboard door and gets angry while Arjun gets himself dressed and stages Urvashi to the terrace.

Later, the family gets ready for the Karvachauth rituals while Madhu orders Rajjo to give the Thals to everyone.

However, as Rajjo gives the Thal to Urvashi, Urvashi starts spraying her eyes with perfume as revenge.

The sieve starts burning in while Urvashi throws it in the air.

Rajjo catches it and sees both the moon and Arjun from it.

Madhu gets angry while the other family rushes to put out the fire.

© Copyright tellybest.com, 2022, 2023. All Rights Reserved. Unauthorized use and/or duplication of any material from tellybest.com without written permission is strictly prohibited.
Cached Saved on: Monday 21st of November 2022 01:52:09 AMCached Disp on: Wednesday 7th of December 2022 03:01:26 PM