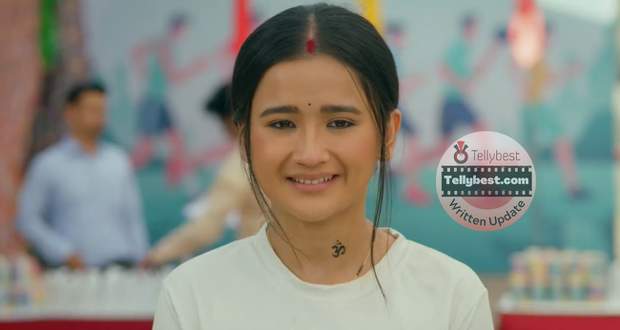 Today's Rajjo 29th December 2022 episode starts with Arjun apologising to Rajjo for suddenly pulling out of the race.

Pushkar announces the name of the winners and Rajjo is excluded from the list which upsets her.

Chirag encourages Rajjo saying that he is proud of his Cheetah.

Arjun confronts Pushkar for not including Rajjo’s name in the winner's list but Pushkar argues that the decision was made by the judges.

Later, Rajjo runs away as she wants to be alone while Madhumalti wants her to get ready and consummate her marriage with Arjun.

On the other hand, Arjun talks to Pushkar and requests that he conducts the race again.

However, Pushkar instigates Arjun saying that his marriage will not go on for long as he will not be able to handle her for long.

Arjun interrupts him stating to not use words like "snatch" and recalls Rajjo's hard work for the race.

Meanwhile, Rajjo overhears their conversation from behind the car.

When Pushkar states that he thinks that Arjun's marriage is a game Arjun agrees and Rajjo gets hurt hearing it.

Rajjo cries and misunderstands that Khad Babu will not be with her for her whole life.

She walks away and Pushkar urges Arjun to make Rajjo do household chores rather than making her an athlete.

Arjun insults his mentality and announces that his Rajjo will shine one day.

In the race track, Manorama is analyzing the electric wire and thinks Pushkar’s shadow will always pose a threat to Rajjo’s life.

In Rajjo’s room, Rajjo is resting her hand on the pillow sadly when Niharika slams a towel on her face.

Niharika walks to the vanity and uses Arjun's cream and cologne and praises his body odour.

Rajjo runs to her and snatches the perfume bottle from her hand.

Niharika states that she wants to eat Arjun’s cheek and Rajjo angrily replies that he is not a vegetable that she can eat raw.

She puts her arms around Rajjo’s neck and asks about Arjun’s nickname which Rajjo calls him.

Rajjo hesitantly tells her about the Khad Babu name and warns Niharika to not dare to call him by this name as only she can use this name.

In the living room, Jhilmil enters screaming in disbelief when she sees Madhumalti eating nonstop and blames her for the wire accident.

Madhumalti shuts her up and states that the wire incident was not done by her.

Later, Madhumalti decides to do something hurriedly as she wants to transfer Arjun’s Akal Mrityu Dosh as soon as possible.

In Rajjo’s room, Rajjo asks Niharika about Arjun as she knows him for a long time.

Niharika narrates the stories of Chirag and Kalindi's secret meetings in which they (Niharika and Arjun) used to go with them.

Rajjo laughs and Niharika encourages her to not lose hope as she has immense potential to become a national athlete.

Later, Niharika takes Rajjo's hand in hers and says she can give an offer to her if she wants.

© Copyright tellybest.com, 2022, 2023. All Rights Reserved. Unauthorized use and/or duplication of any material from tellybest.com without written permission is strictly prohibited.
Cached Saved on: Wednesday 25th of January 2023 09:55:49 AMCached Disp on: Wednesday 1st of February 2023 05:35:25 PM