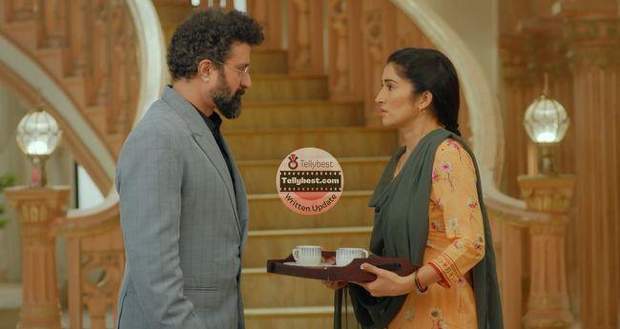 Today's Rajjo 29th November 2022 episode starts with Rajjo telling Manorma that she is here to protect Arjun from Urvashi and after that, she will leave. She only prays that everything happens for Arjun’s benefit.

Rajjo feels sad thinking about leaving Arjun soon while Manorma has forgotten about her.

Just then, Pushkar comes to Rajjo and asks her to give food to his daughter Kalindi.

Later, Pushkar watches Manorma sleeping and tells her that from tomorrow her bad timings will start.

Manorma gets up thinking about being more careful around Pushkar as he is after her as well.

The next morning, Chirag teases Arjun by lying about Rajjo being admitted to the hospital.

Afterwards, he tells him that he cares for Rajjo and should think from his heart about her.

Meanwhile, Madumalti tells Arjun to not think about getting involved with Rajjo. She asks him to focus on Urvashi with whom he is getting married and push Rajjo out of his thoughts as she will destroy him.

Madhumalti also expresses her concern about Chirag manipulating Arjun towards Rajjo while Pushkar tells her to not worry as he will treat him so badly they will remember it for their lifetime.

Later, Arjun watch Rajjo tangled among wrapping papers and smiles admiring her while Chirag smiles at him meaningfully.

After a while, Arjun tries to make Rajjo jealous by praising Urvashi to Pankhudi.

Meanwhile, Rajjo babbles about him on hearing Arjun’s praises for Urvashi.

Later, Arjun comes to ask her about mocking Urvashi.

Rajjo is least concerned about his anger and tells him that yes she is making fun of her while Arjun tells her that she is acting jealous of Urvashi.

Rajjo asks him whether he was making her jealous or trying to convince himself about Urvashi.

Looking at him meaningfully, Rajjo tells him that she already knows Urvashi is wrong for him but he will find out soon.

Later, Rajjo mocks Arjun for not using shut up and puts on tape on his lips telling him that it is her job to irritate him while she is here and not the other way around.

After a while, Rajjo overhears Urvashi talking to a money lender about giving 10 lac rupees and follows her in hope of getting evidence.

She is shocked to see Kalindi when spying on Urvashi and wonders what Urvashi has on Kalindi.

Later, Rajjo tries to capture Urvashi giving money to a lender but fails due to the commotion on the road.

Afterwards, she wonders what Kalindi is hiding and is being blackmailed for by Urvashi.

© Copyright tellybest.com, 2022, 2023. All Rights Reserved. Unauthorized use and/or duplication of any material from tellybest.com without written permission is strictly prohibited.
Cached Saved on: Wednesday 25th of January 2023 12:32:56 PMCached Disp on: Thursday 9th of February 2023 05:47:24 AM