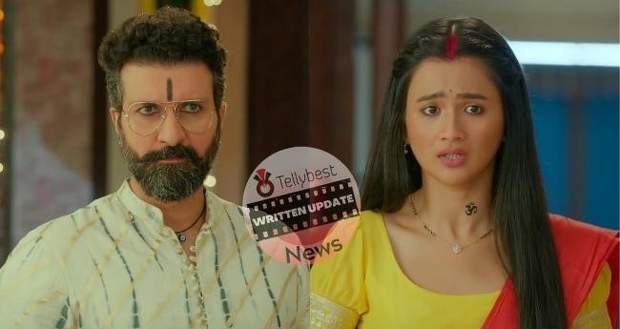 Today's Rajjo 29th October 2022 episode starts with Jhilmil complaining about the moon not being visible while Rajjo goes away from Arjun and listens to their complaint.

Meanwhile, Kalindi being busy on a phone doesn't notice the nails on the poll when Pushkar rushes to save her.

Pushkar tells his daughter to be careful while the family members tease him about Pushkar's love for his daughter.

Jhilmil gets upset as the moon is still not visible while Madhu sends Rajjo to go to the kitchen and bring the plates needed for the Karvachauth rituals.

However, as soon as Rajjo enters the kitchen, she gets locked inside as Madhu and Jhilmil get happy thinking Rajjo will not bother them anymore.

Madhu also increases the volume of the songs playing so that nobody will hear Rajjo's shouts.

The ritual starts as Rajjo looks at Arjun through the window and gets upset as she can't break her fast.

However, as Rajjo is looking at him, she notices the pillar shaking and shouts his name to alert him.

It is too late as the pillar falls and causes a massive fire around the area.

Arjun gets trapped while Rajjo looks at it from the inside helpless and sees the family members getting worried.

Arjun starts falling unconscious while Urvashi acts of running into the fire to save him as the loan shark uncles hold her back.

Meanwhile, Rajjo breaks the window using a utensil and runs to save Arjun while covering herself in a shawl.

Rajjo takes Chirag's name and shouts at him to throw water on her as she jumps into the fire and covers both herself and Arjun from the fire.

In the end, Rajjo falls unconscious and Arjun makes her drink water while Madhu and others look on with disgust in their eyes.

Chirag says that Rajjo risked her life to save Arjun while Urvashi didn't even move from her place.