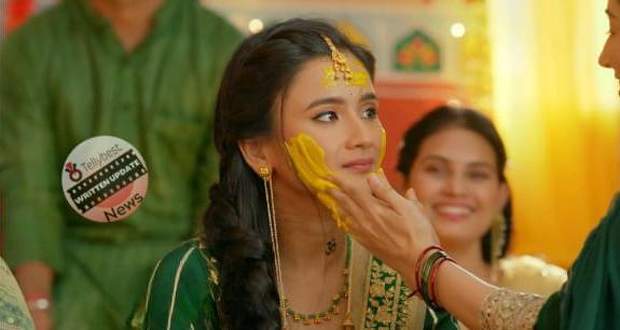 Today's Rajjo 29th September 2022 episode starts with Rajjo imagining Khan babu talking to her on a string cup and telling him she misses him.

However, Rajjo's hallucination breaks and Vicky is standing in front of her and he says “statue” and touches her nape creepily.

Creeped out Rajjo starts to walk inside but Vicky insults Rajjo by saying she has spent 2 weeks with Khan Babu in his room.

Vicky accuses Rajjo of paying a price to Khan Babu for his help and questions her character.

Furious, Rajjo screams at Vicky to shut up and compares Arjun with god and goes inside furiously.

Later, Manorama asks Rajjo about the reason for her sadness and she asks her Maai how to identify bad touch.

On the other hand, Urvashi puts her hand on Arjun’s shoulder and both drink fruit wine from the same glass.

Looking into Urvashi’s beautiful stare, Arjun holds her delicate body in his arms and dances with her.

Urvashi feels her breath hitch when Arjun teases her with his feathery touches on his arms.

However, Vicky’s face flashes in front of her when her Maai talks about bad intentions.

Seeing Rajjo lost in her thought, Manorama asks Rajjo if she finds comfort in someone's arms but Rajjo hugs her Maai crying.

Meanwhile, Manorama assures Rajjo that Vicky will keep her happy and she will come to love him eventually.

In Arjun’s room, Urvashi confesses her love to him and Arjun informs her that he will wait for her during their Haldi ceremony.

Later, antsy Arjun sits with Chirag and his brother advises him to talk to Rajjo as he is worried about her.

Not listening to Arjun’s refusal, Chirag calls Rajjo and Vicky picks up the call.

Meanwhile, Chirag asks Vicky to give the phone to Rajjo but Vicky lies to them about Rajjo being exhausted after dancing with him.

At the same time, Rajjo comes out of the room and Vicky cuts the call panicky and puts the phone on aeroplane mode.

Rajjo calls Vicky inside and he apologises to her for his harsh words.

On the other hand, Chirag expresses his suspicion of Vicky taking advantage of Rajjo while Arjun is worried about her.

At the same time, Vicky exclaims he is only worried about the money that he will get from Pushkar after sending Rajjo out of India's border.

© Copyright tellybest.com, 2022, 2023. All Rights Reserved. Unauthorized use and/or duplication of any material from tellybest.com without written permission is strictly prohibited.
Cached Saved on: Monday 21st of November 2022 08:20:06 AMCached Disp on: Saturday 10th of December 2022 03:06:11 PM