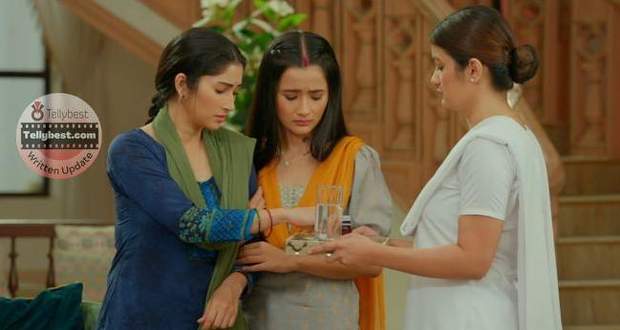 Today's Rajjo 2nd December 2022 episode starts with Chirag asking Sia to pray to God to give Rajjo to Arjun.

Chirag tells her that he is trying to be a good parent to Sia despite their differences and she should do the same.

After a while, Madhumalti prays to God to get the ceremony done without any problems while Jhilmil assures her that today’s function is going to be rocking.

Sia prays to God to give Rajjo to Arjun while Rajjo admires Arjun looking so handsome and prays to take all his problems upon herself.

Meanwhile, Manorma is sleepwalking in the corridors of the Thakur residence.

Just then, Rajjo spots the money lender and realises Urvashi’s reason for not coming down.

In the meantime, the nurse informs Pushkar about Rajjo going AWOL which worries him and he goes to find her.

Meanwhile, Urvashi's stressing in her room while Madumalti asks Pankhudi to bring Urvashi down.

Pankhudi tells her that Urvashi keeps telling her that she will be down in 5 minutes.

Meanwhile, Rajjo uses the laser beam to attract Arjun’s attention and calls him aside.

On the other hand, Puskar spots Manorma and goes to get her but Manorma has already left.

Later, Rajjo tells Arjun that Urvashi is having second thoughts about getting married to him.

Arjun and Rajjo begin to banter with each other.

Rajjo paints a horrid picture of Urvashi leaving him through the window and tells him that she has seen this in many movies.

Arjun gets irritated and tells her that he is going to check in on her.

Rajjo feels relieved seeing Arjun go knowing too well that Urvashi will not be able to refuse Arjun.

Meanwhile, Urvashi begs to give more time thinking that the money lender has come to her room.

However, seeing Arjun she changes her tone and tells Arjun that she is afraid that Rajjo will again cause some problems during her celebration.

After a while, Arjun comes down carrying Urvashi in her arms while Rajjo looks offended and hurt.

Meanwhile, Pushkar has a bad daydream where Manorma tells Madumalti and Kalindi the truth about Rajjo.

Later, Moneylender comes to Urvashi and introduces himself as Urvashi's teacher.

Urvashi looks scared while the moneylender hands over the gift to Urvashi.