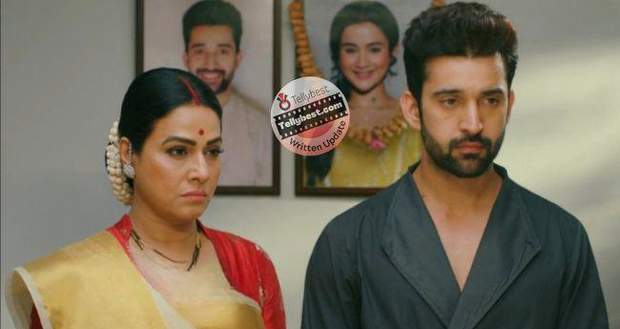 Today's Rajjo 2nd January 2023 episode starts with Rajjo demanding that the whole family will go on honeymoon with them as they will enjoy more with more people.

Embarrassed, Chirag asks Arjun to take her away and make her understand what a honeymoon is.

Arjun takes Rajjo to a secluded corridor and states that she is so cute that he cannot even scold her.

Rajjo starts bantering that she is not foolish and tries to make him understand that they will enjoy much more with the family.

Arjun tries to make Rajjo understand that only 2 people go on a honeymoon and then she asks him if this is a rule made by the government.

He grabs his head and Rajjo asks him if he has ever gone on a honeymoon before.

Later, Rajjo imagines a vacation with Chirag, Kalindi and Arjun in which they will stay in one room and sing songs and play Antakshari.

Arjun calls himself a donkey while she urges him to go on a honeymoon with him.

He agrees and Rajjo hugs him while he stands still feeling her soft body around her.

Arjun hesitantly tells her to find out the true meaning of honeymoon from her Maai.

Rajjo happily agrees and walks away while Arjun calls her "jhali" (mad) and thinks of her reaction when Manorama will tell her the meaning of the honeymoon.

In Manorama’s room, Rajjo stands shocked with wide eyes and blames her Maai for not telling her about the honeymoon before.

Manorama laughs at her daughter's innocence while Rajjo is bantering feeling embarrassed about her words said to Arjun earlier.

Later, Rajjo informs her Maai that Arjun wants to help her by making her an athlete and he wants nothing to do with her.

Manorama asks her to confess his love to Arjun as he did not refuse to go on a honeymoon with her.

She tells Rajjo that she can measure love when you are afraid to lose the other one and gives an example that Arjun and she came running to stop each other's marriage.

Manorama advises her to safeguard her love unlike her who didn’t get any.

The next morning, Kalindi teases Rajjo if she has kept any night dress for Arjun.

Rajjo gets embarrassed and tries to distract Kalindi but she compliments her glow.

At the same time, Kalindi sees Rocky and he signals her to come behind the bushes angrily.

Kalindi walks to him and tells him to go away but he grabs her arms and drags her away forcibly while she begs him to leave.

Rocky demands Kalindi to be in a relationship with him like before but she warns him to be away from her.

Rajjo is embarrassed and shares many awkward movements with Arjun like when he asks her to put on the seatbelt, she starts to pull his seatbelt.

After some time, Arjun plays the stereo and romantic songs start to pour in making their heart flutter.

Both Arjun and Rajjo's hands meet when they extend their hands to change the song.

© Copyright tellybest.com, 2022, 2023. All Rights Reserved. Unauthorized use and/or duplication of any material from tellybest.com without written permission is strictly prohibited.
Cached Saved on: Wednesday 25th of January 2023 10:31:18 AMCached Disp on: Wednesday 1st of February 2023 05:27:01 PM