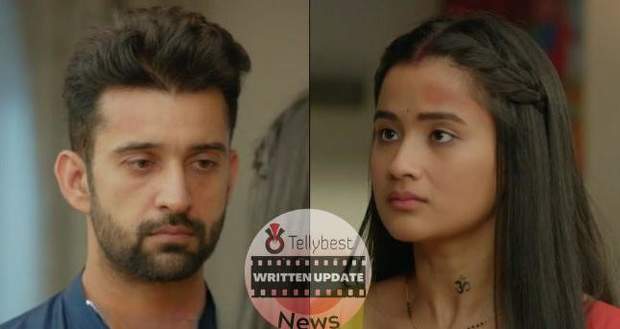 Today's Rajjo 2nd November 2022 episode starts with Arjun staring at Rajjo and deciding that he will not change his opinion of her and do as he sees fit.

Rajjo works in the kitchen while Sia comes and asks her to help her to play with colors.

Rajjo tells Sia that she will accompany her as soon as she is done with her work while Sia tells her how Urvashi’s uncles got scared of Sheru.

After Sia leaves, Swara comes in and tells Rajjo that she has to deliver the food to the City Hospital which surprises Rajjo.

Rajjo tells Swara that she goes there often and will personally deliver it but Swara asks Rajjo to take it with her for her uncle.

Later, Urvashi’s uncles prepare to leave the house as their objective to come has been fulfilled.

Arjun proposes to carry their suitcase but they do not allow him to touch the suitcase which makes everyone feel weird.

As Urvashi signals, her uncles tell everyone that in their family, they do not make sons-in-law do any work.

Kalindi calls Rajjo and tells her that she saw Urvashi taking the Swarn Kalash (golden pot) downstairs but she cannot find it anywhere now.

Rajjo recalls bumping into one of Urvashi’s uncles while trying to steal the Kalash and telling Kalindi about it.

Seeing the uncles hugging the suitcase close to their hearts, Rajjo and Kalindi realize they are leaving with the Kalash inside their bag.

As Urvashi and the others bid goodbye to her uncles, Rajjo releases Sheru toward them from a corner.

Seeing Sheru, Urvashi’s uncles jump with fear and the suitcase falls to the ground.

Arjun proposes to carry it and lifts it up resulting in all things crashing outside including the golden pot.

Everyone gets shocked to see the golden pot there while Arjun questions Urvashi about how their golden pot got into her uncle’s luggage.

However, Urvashi turns the tables by saying that she was unaware of her uncles’ ploy and is ashamed of them.

Rajjo tells everyone that she saw Urvashi bringing the pot downstairs to which Urvashi says she ran away in fear as a lizard fell on her.

Urvashi tries to blame Rajjo for keeping that pot in her uncle’s bag but Arjun asks her not to pull Rajjo into it.

After Urvashi’s uncles leave, Urvashi acts emotionally in front of the family members and succeeds in gaining their trust again.

© Copyright tellybest.com, 2022, 2023. All Rights Reserved. Unauthorized use and/or duplication of any material from tellybest.com without written permission is strictly prohibited.
Cached Saved on: Monday 21st of November 2022 06:38:37 AMCached Disp on: Monday 5th of December 2022 12:20:29 AM